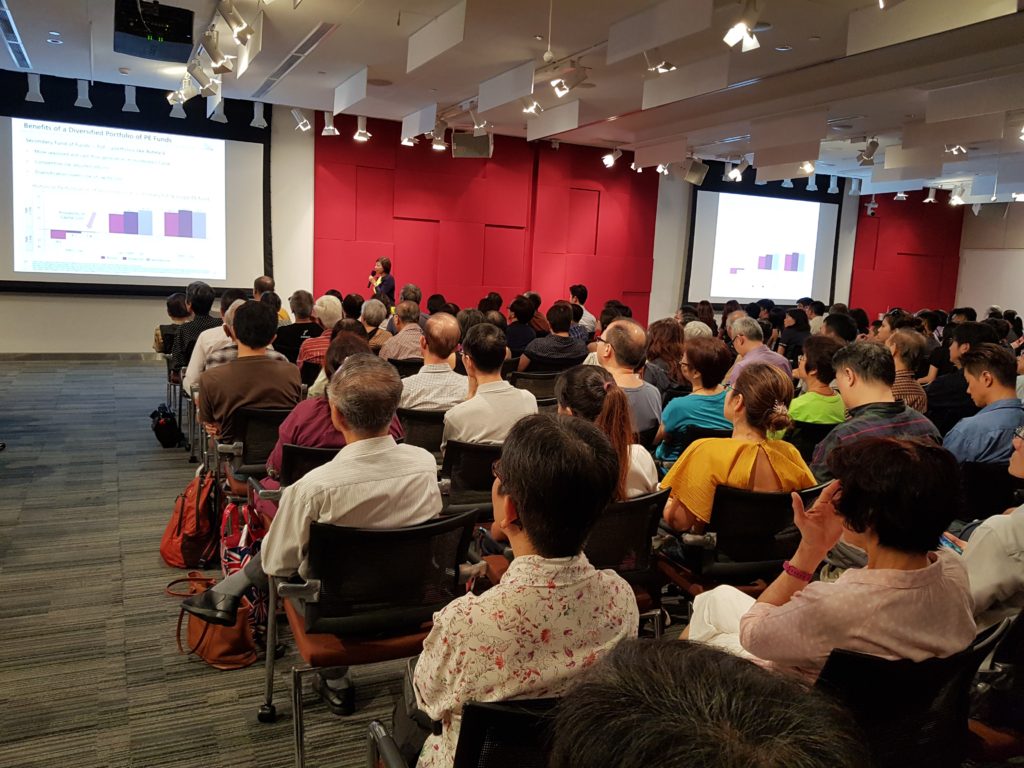 For those who missed it, the balloting results for Astrea V were out on Wednesday, and the bonds started trading on the SGX on Friday. Because these bonds were so hot, and because they inspired so much debate, I wanted to do a simple debrief and take the opportunity to respond to some common criticism.

The applications for Astrea V against Astrea IV are set out below:

The total number of subscriptions came in at S$820 million, slightly lower than Astrea IV’s S$890 million. The main difference though was the offer size, because Astrea V’s was 50% larger at S$180 million, so the public tranche was only 4.5 times oversubscribed versus Astrea IV’s 7.4 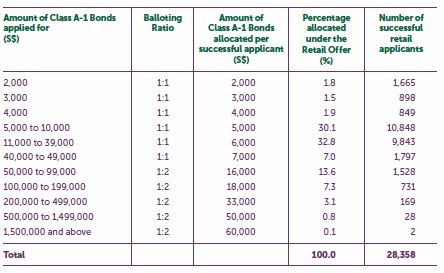 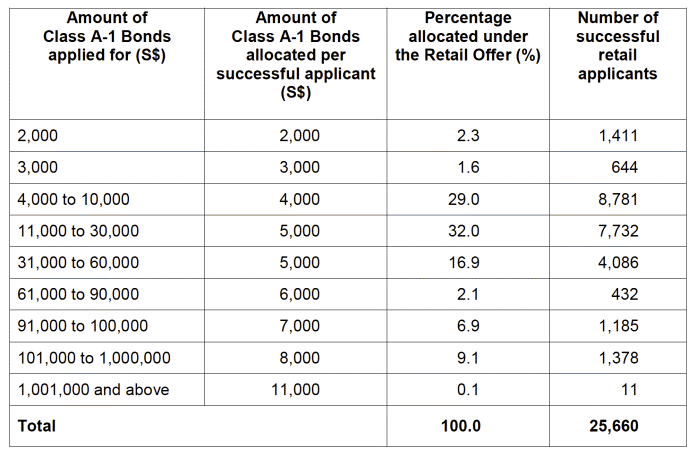 Astrea V commenced trading on Friday 21 June, and closed at a price of 1.037. So that’s a nice 3.7% increase, just for doing nothing much. At it’s current price, it trades at about a 3.5% yield to maturity, very similar to where Astrea IV is trading.

All in all, this was a very strong showing by Astrea V at IPO, much much better than something like Eagle Hospitality Trust. It’s just that Astrea IV was incredibly strong, so by contrast, Astrea V doesn’t look as good. 4.35% for a low risk investment was a complete no brainer, 3.85% for a slightly higher risk invest… less of a no brainer, but still very good.

Criticism of the Bonds

Because Astrea V was so popular, it attracted a lot of great commentary as well. I’ve been reading a lot of them with great interest, and long story short, the main criticism is that the Risk-Reward is not attractive for a private equity investment

I though this argument was best articulated by this blogger. I’ve summarised it very simply below, but it’s well worth the read if you have the time:

And the conclusion is extracted below:

The minimum expected return for a PE investment via equity financing is around 15% on a CAGR basis. The Astrea bondholder is investing for merely 3.85% with the illusion of senior priority, risk of withdrawal by other investors and the high NAV price which is characteristic of an investment into a mature fund.

In addition, there are also the list of risks disclosed in the prospectus which are unique to a PE investment and applicable to you even as a bondholder.

Given the slowing global macro environment which have been agreed by various global central banks statements and reports in the past 6 months, we urge investors to be cautious in aggressive investments due to possible devaluation of asset prices which would directly affect the underlying value of the assets and the cashflows for the Astrea V bonds.

Therefore, it is beyond our understanding as to why one would agree to a 3.85% return.”

And for the record, the blogger himself agreed that creditworthiness of the Astrea V Bonds is not an issue:

“At the time of writing, we like to state that we think Astrea will be able to meet all coupon payments on a timely basis. We think the worst case scenario would be an under fulfilment of 1-2 tranches of reserve payment and a minor delay in the mandatory call. This is not attesting to the strength of the underlying investment but because the reward is a very small portion of the entire available pie.”

To be fair to him, I actually agree with a lot of his points above.

But where I disagree, is the conclusion.

I think a lot of people are looking at the underlying PE Funds and securitisation structure and this is clouding their judgment. But let’s try to separate both issues.

If offered this product now, would you invest? Well I absolutely will.

The thing about debt investing, is that you cannot think like an equity investor. The nature of the investment is fundamentally different.

When you’re investing in equity (like stocks), your potential upside is unlimited. If you invest in Tesla and the company does well, the sky is the limit as to returns. So when you invest in equity, you have to think about how well the company will be able to grow in future, because that determines your returns.

So yes, I agree that the Astrea bonds can be a way for Azalea to really juice their returns. They’re basically borrowing money from investors to invest in Private Equity. If they borrow from you at 3.85% and the PE Funds returns 15% a year, they’re just made a 10.15% return. But hey, what does it matter to you what Astrea does with the moneys?

Think about it this way. Imagine that a bank gives you a mortgage to buy a property at 2% a year for 10 years. After 5 years, the property goes up in value by 100%. Now the bank is upset, and complains that he should have a bigger share because the property went up in price. Really?

Debt investing is about creditworthiness. Full stop. Once you’ve determined the chance that the issuer will default, the next question is whether the yield is worth the risk. What the issuer decides to do with the money, is entirely up to them.

So all I’m saying, is that you should view the issues separately. Evaluate the risk of default of the bonds, based on the underlying PE assets, and securitisation structure. And the general consensus here, is that the chance of default is incredibly low. Once you know this, then decide whether the yield is worth it, for the risk you are taking on.

Pricing of the bonds

Word on the street is that Astrea again left some money on the table for these bonds. Apparently they could have priced it much higher and they still would have fully filled their books from institutional investors, but they deliberately priced the yield slightly higher for retail investors.

I know it seems like a trick (why would a government linked entity be so kind), but if you look at the recent SIA bonds which listed at 3.03% yield, this theory actually makes a lot of sense.

SIA’s creditworthiness isn’t significantly better than Astrea V, so there’s absolutely no reason why SIA is borrowing from retail at 3.03% when Astrea is doing it at 3.85%.

When I was at the Management presentation by Astrea, they kept talking about how they’re trying to open up private equity to the public. So they’re starting with these Class A PE bonds, eventually move on to the Class B bonds, and in the extreme long term, they may even open up the equity tranche to retail investors.

Viewed this way, there is massive incentive for Astrea to ensure that these bonds succeed, to give the public a favourable impression of private equity as an asset class, and Astrea as an issuer. Which could explain why they “left some money on the table”, and went out of their way to structure a sound product.

And hey, if government wants to give out some free handouts, I’m happy to oblige.

Anyway, based on the rough timeline of Astrea I to V, and communication from their management team, it seems like they generally try to launch a new Astrea product every 12 to 18 months. So stay tuned to this space, because with the success of Astrea V, I’m absolutely sure there are going to be more products coming in future.

Hopefully we’ll start getting access to the Class B bonds, because it would be incredibly exciting to evaluate the higher tier bonds, and watch the investor takeup.

Closing Thoughts: Do I regret buying these bonds?

Do I regret buying Astrea V? Absolutely not.

I still believe that the chance of default after 10 years is incredibly low. I have no plan to sell these bonds before maturity, so as long as I keep holding them, the minimum return here is 3.85%.

And when the 5 year SSB now yields 1.98%, and a blue chip REIT like Mapletree Commercial Trust yields 4.5% (with serious risk of capital loss), that 3.85% yield looks pretty great.

Are you guys pleased with your investment in Astrea? Share your thoughts in the comments section below! I respond personally to all comments!