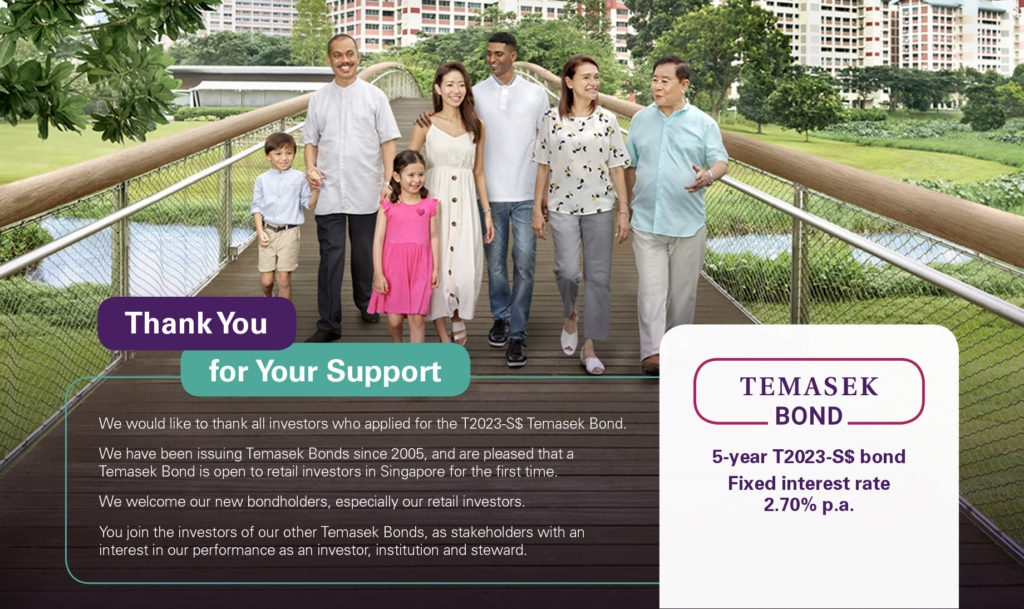 As most of you are aware, last week’s Temasek T2023 2.7% 5 year Retail Bonds sold like Bread Talk’s pork floss buns when they first came out (am I getting too old?). 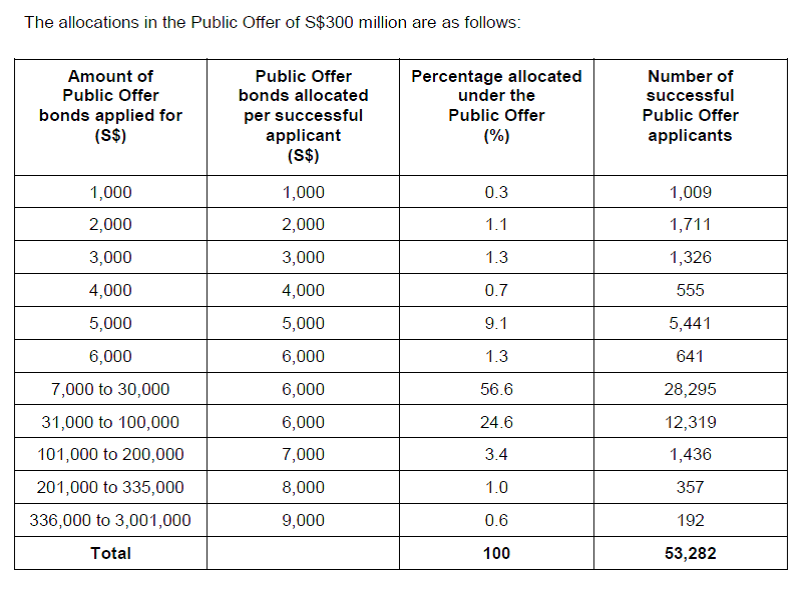 As a rough comparison, the Astrea IV Bond allocation was 7.4 times oversubscribed, with S$890 million applications received on S$121 million of bonds. Astrea’s allocation is set out below, where most people would have received S$4000. 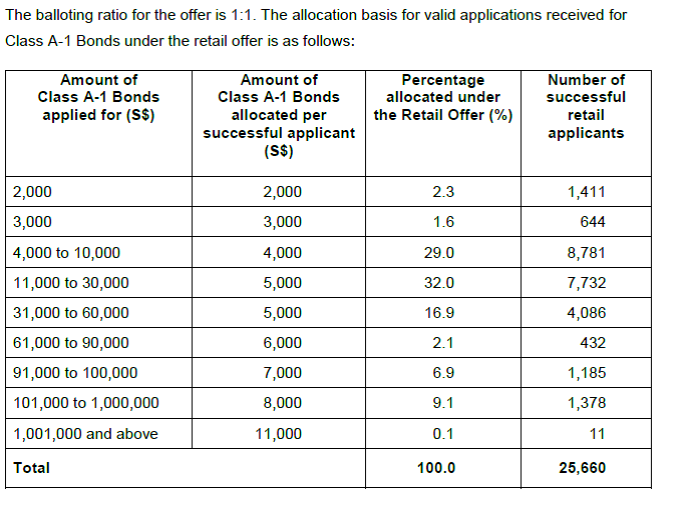 My immediate takeaway, is that Astrea, which offers a 4.25% coupon, attracted only S$890 million in orders, while these Temasek Retail bonds, which offer a 2.7% coupon, attracted over S$1.6 billion in orders. Why are the Temasek Retail bonds so much more attractive to retail investors, when personally I felt that the Astrea bonds offered a more compelling risk-reward profile?

I have a couple of theories set out below:

Do you agree with any of the above? Leave your thoughts below!

A huge shoutout to all readers who commented on my Temasek Retail bond article, because the quality of comments was truly amazing.

Unfortunately I was on the road the past week, so I didn’t get a chance to respond to you guys personally, huge apologies for that. In any case, the comments were really insightful and warrant a proper response, so I wanted to address them in this article.

Reader: Hi, I know this is not a fair comparison, but comparing the GE270 endowment (which has already closed a few months back) and the Temasek bonds, which do you think is a better option?

Financial Horse says: I didn’t follow the GE270 endowment closely, so I did a quick read up (there’s a nice summary on Seedly):

There are 2 key differences between these Temasek Retail bonds and GE270:

If I had to pick, I would say these Temasek Retail bonds are by far superior to GE270, for the 2 reasons mentioned above.

Reader: I’m taking the opposite view. While i totally agree with all the risk rating analysis etc but as to the part where you are comparing to fixed deposits i do not agree. Today SCB esaver and Maybank isavvy (and for priority) we are getting 1.8-2% by December 2018 and probably 2.5-3% as we expect FED to increase rates by another 75-100 basis points by December 2019. Its better to put in savings above and let interest rates roll up.

That’s actually a really interesting point you brought up.

For discussion’s sake, I’m going to share my personal view. My personal view is that some time in 2019, due to the trade war and political pressure from Trump, the Feds are going to find it harder and harder to raise interest rates in line with their current dot plot. If they do continue hiking, there is a real risk they tighten the US economy into a recession, and are forced to cut rates. In other words, either situation results in the pace of interest rate increase slowing after 2019.

If you’re confident that the rate hike is going to continue unimpeded and hit 3% plus in 2019, then don’t buy these bonds, because we’re going to be seeing a much higher interest rate environment.

Personally, I’m not convinced that will be the case, and I do think 2.7% in the current climate is attractive. There’s no need to bet your house on these bonds, but they’re a useful portfolio diversifier, because sometimes our predictions about the markets just don’t pan out.

Reader: Isn’t it cheaper to buy in the secondary market when fed hikes later this year

However, BT sums it up well in the extract below:

However, Mr Zhan said he was surprised when the bonds opened above 102 cents: “I believe retail investors priced the bonds too high. The yield (for the Temasek retail bonds) should not trade below those of Singapore Government Securities (SGS) or HDB.”

In other words, because the liquidity on the secondary markets is so poor, it calls into question whether there is efficient price discovery. So yes, I agree with you that theoretically speaking, when the Feds hike interest rates, the price of these bonds will fall. However, when that happens, most investors may choose to just hold their bonds to maturity, so you have poor liquidity and poor price discovery, so in reality the price may not budge much, as we have seen with the current pricing of these bonds on the open market.

Reader: Okay, I must first put the disclaimer that I do not have any substantial grounds to make the points I am going to make here; are there any chance that the money raised will be used to fund the purchases of “distressed” assets from HNA in the very near future? One can google “Temasek” and “HNA” together and you will get a picture of the possible upcoming deals with the troubled Chinese conglomerate.

I think the question here is this: Why would it trouble you if the money raised is used to buy “distressed” assets from HNA? Unlike equity instruments (like stocks), debt investors (like a buyer of these bonds) are not entitled to any additional upside beyond the coupon they are entitled to. As a debt investor, the only thing I care about is the credit worthiness of the guarantor, being Temasek. If they decide to buy a couple billion of distressed assets and lose money on it, I’m still okay because Temasek, being Temasek, is unlikely to default because of such losses.

Unless of course, your concern is a moral one. In which case the use of proceeds of these bonds is:

“The net proceeds will be provided by the Issuer to Temasek and its Investment Holding Companies to fund their ordinary course of business.”

So yes, they can theoretically use it to buy assets from HNA if they want to. Although from a pure, investment perspective, it doesn’t really matter all that much what they do with the money.

Reader: I test sell SGS on Sgx for 6 months in queue. Yes its was very very difficult to sell without taking a loss. Even if i was willing to take a small loss, still no buyer. The market makers are all the banks and boy they are much smarter than all of us. So FH is right to be cautious about liquidity risk.
From the past 1 year trend, I am guessing that in 2 years’ time or maybe even shorter, the 5Y yield may touch 2.7%, which means the market price will be below $1. It is just 0.3%+ away. So buy with the mindset of a 5 years lockup is safe approach.

Thanks for the great share! I’ve mentioned many times that liquidity on the SGX is a real issue (just try placing a buy/sell order for a low liquidity counter), and this is fantastic evidence of that.

Reader: In the last PE bond, those who applied for > $1M only get $11K. They must be cursing, thinking WTF waste my time, only got 0.1% allocation. The problem again is the $200M issue size is too small. Just take a few UHNWI (with net worth more than US$50M which SG has plenty) to dump in some money and it will be hugely oversubscribed.
I didn’t apply the last round but for average joe, not too happy too if I did apply. Those who apply for $60K only got $5K. Again I think they will probably think “waste my time” since the annual coupon of $200 is so little.
Since the media blew this up, don’t expect to get more than $5K even if you throw in a lot. So was wondering is it worth the effort and my $2 this time?

The way I will play these bonds is this: