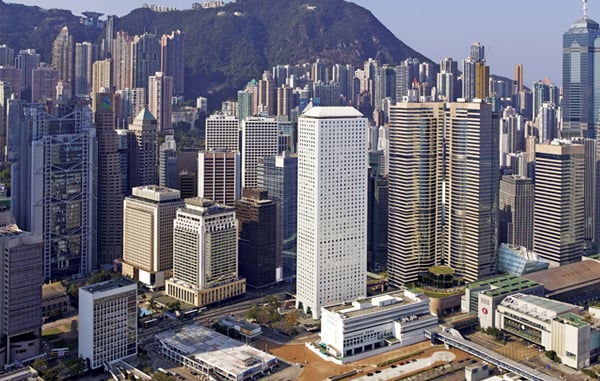 I recently added HongKong Land to the FH Stock Watch. It’s been a stock that I’ve been following for a while, and one that I’ve been very interested in, for the very simply reason that its valuation is dirt cheap.

It holds prime real estate in the CBD of Hong Kong and Singapore, and is trading at 0.33x book value. Surely I’m missing something here, or this is the best buy of the decade?

Basics: What is HongKong Land?

HongKong Land is a property developer.

Think of something like Lendlease or CapitaLand or Mapletree, replace the Temasek with Jardine Holdings, remove the REITs platform and the private funds, and you get an idea of what Hong Kong Land is.

It’s a much purer form of property developers, where they hold a lot of properties on their balance sheet and develop new ones. It’s like what the Singapore players used to be before the advent of REITs.

The bulk (83%) of HongKong Land’s property portfolio is in Hong Kong, with another 10% located in Singapore. The rest are development properties (residential), mainly in Mainland China and Singapore. 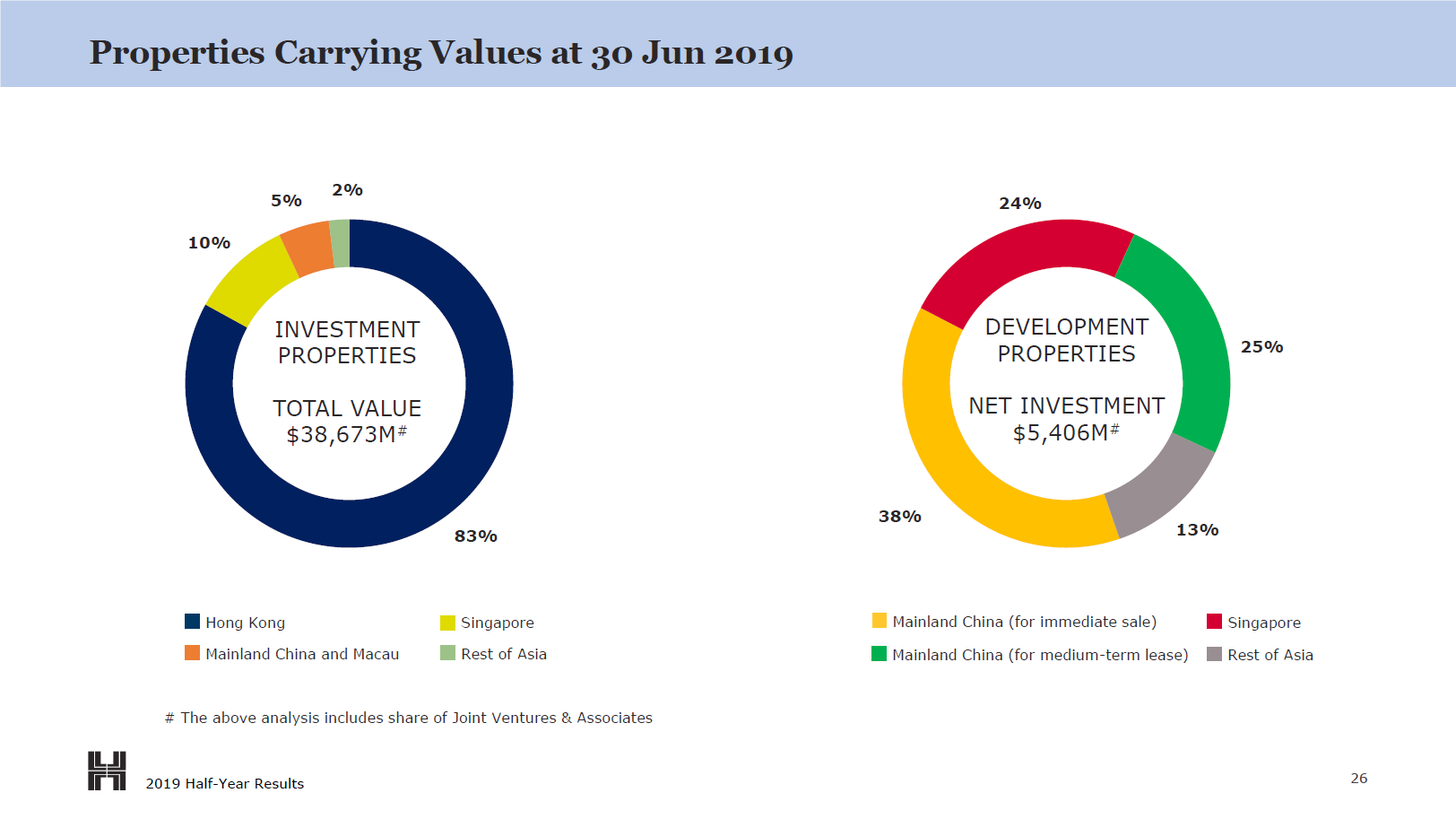 But make no mistake, HongKong Land’s Hong Kong portfolio is serious stuff, as would be evident from the name. I’ve extracted them below, and they’re all located right smack in the heart of Hong Kong’s central district. 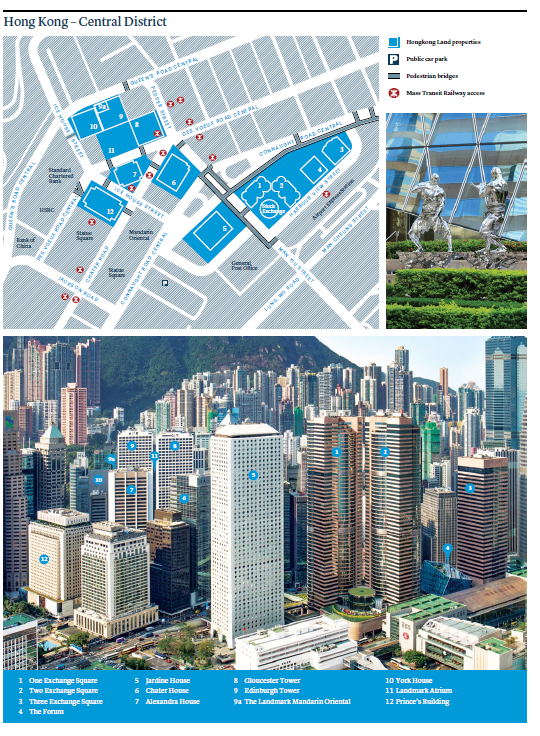 I’ve compared the valuations of HongKong land against Hang Lung Properties and CapitaLand below (tables are from ShareInvestor WebPro – check out the link here if you want a promo code).

Sometimes when property companies are trading at such big discounts to their book value, it could be due to the fact that their book value is goosed up. So I dug a bit deeper and extracted the capitalisation rates used to value their properties (basically their yield on the property that they use for their valuation), and they all seem to be in line with market standards. Sure, you could argue that the lower end of the cap rates are on the low side (ie. 2.75% for Hong Kong and 3.5% for Singapore look a bit pricey), but they’re still not completely out of whack here.

And even if we are extra conservative and knock 20% off HongKong Land’s entire book value, this stock is still trading at a 45% discount to book.

ROE for HongKong Land is quite poor, coming in at 4.5%. But to be fair, this is true for most Hong Kong property developers, simply because they hold so much property on their balance sheets (whereas Singapore developers use funds/REITs).

HongKong Land is currently trading at a 4% dividend yield (trailing twelve months), at a 29% payout ratio. So there’s a lot more room to raise the dividend if they so choose.

Just imagine if this was a REIT with a 90% payout ratio. That would triple the dividend overnight to 12%.

Hong Kong Land’s gearing is ridiculously low as well, coming in at 10%. Liquidity Ratio is a fantastic 1.7, and the average tenor of debt is 6 years.

In other words, the balance sheet of HongKong Land is rock solid, and there’s very little risk of this company going under in the short term due to liquidity issues. 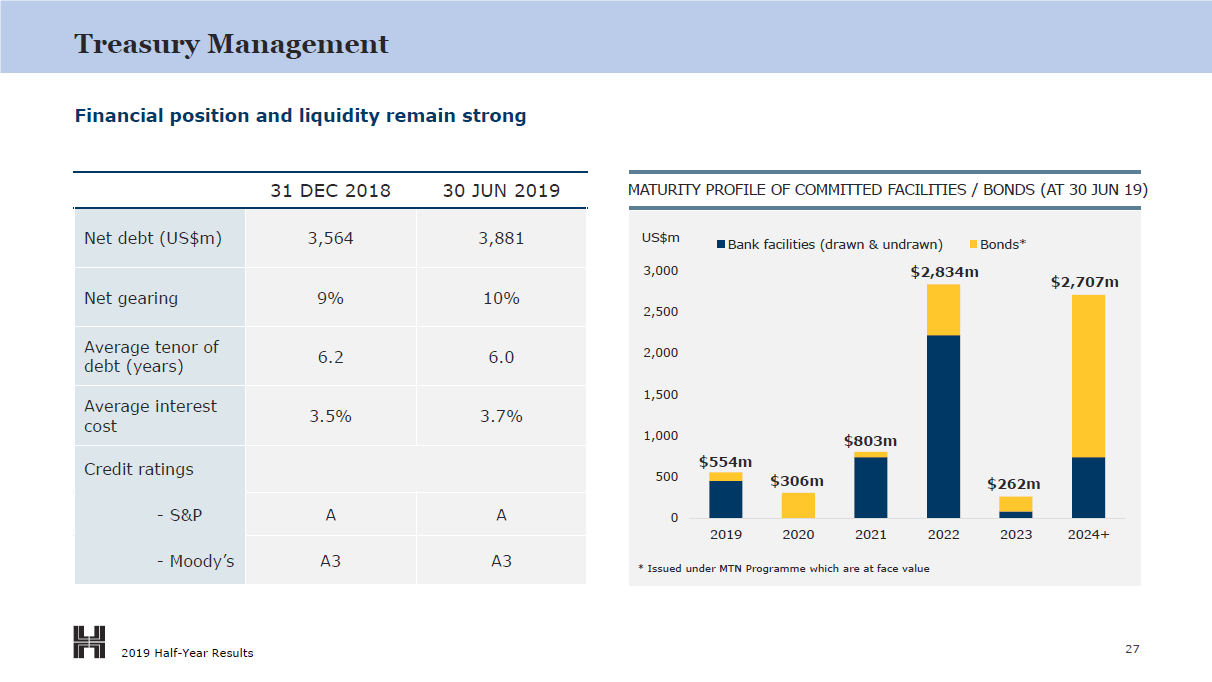 Ownership though, is where it gets interesting. Jardine Strategic holds more than 50% of HongKong Land. So Jardine to HongKong Land is basically Temasek to CapitaLand.

And with a single large shareholder like that with majority control, the options that minority shareholders have to unlock value are limited. An activist investor style strategy may be hard to pull off with a 50% shareholder in play (not to mention that these are uncommon in Asia), and for a privatisation bid, there’s really only one guy who can take it private.

What concerns me about HongKong Land

On paper, HongKong Land is a fantastic company. Valuations are great, dividend is attractive with low payout ratios, and gearing is low. There are however, 2 main points that concern me about an investment in HongKong Land: (1) the Hong Kong situation, and (2) catching falling knives.

80% of HongKong Land’s property portfolio is located right smack in the heart of Hong Kong’s CBD.

Sure, most of those properties are locked into long term leases right now, but over time, if the protests get worse, and Hong Kong’s viability as a financial centre is compromised, those long term leases are not going to get renewed, and the value of the property is going to drop.

It’s really as simple as that. Long term, if the Hong Kong protests go away and its business as usual, there’s probably a fair bit of upside here. If it doesn’t, then that 67% discount to book priced into the stock looks just about right.

So an investment into HongKong Land requires a rough understanding of how this Hong Kong situation will play out longer term.

Hong Kong’s usefulness to China today comes in 2 forms: (1) its capital markets allows onshore companies to tap foreign capital (and vice versa), and (2), the freely exchangeable HKD allows companies to move money in and out of China, via Hong Kong.

So for a mainland city like Shanghai or Shenzhen to be able to replace Hong Kong, it will need (1) a deep, open and regulated capital markets that foreign investors can access, and (2) a currency that is freely exchangeable and not subject to capital controls.

Now that’s not an easy ask. There used to be a saying that you need about 70 years to build a financial centre along the likes of Tokyo, Hong Kong, London or New York. It’s probably a lot less these days given how quickly things move, but it still underscores how much work needs to be done.

Point (1) is a given, and will only grow in the coming years. Point (2) is there as well, with the China government implementing a whole host of supportive government policies and macro-economic stability that really boosted their track record since the 2008 financial crisis. Point (3) is slowly getting there, with stuff like the MSCI world inclusion, Belt and Road Initiatives etc.

Point (4) though, is where progress so far has been slow. Foreign investors are not able to access onshore capital markets freely (due to capital controls), and the offshore RMB does not have deep liquidity along the likes of the Euro or even the Yen (let alone the USD). The regulatory climate is also uncertain, with onshore capital markets haven’t been largely untested for foreign investors.

For now at least, the Shanghai / Shenzhen capital markets are not able to rival Hong Kong in terms of access to foreign capital.

The second one is equally tricky. There is an offshore renminbi (CNH) market currently, but if you compare the depth of that market to something like the USD, the Yen or the Euro, then the CNH is just not there yet. As a rough gauge, global payment currencies currently look like this: USD (42.52%), EUR (32.06%), GBP (6.21%) and JPY (3.61%), with RMB coming in at 2.22%. Investor confidence in RMB also takes some time to build up, as it doesn’t have the same kind of track record the USD or even the Yen has.

In time to come, this will change, as initiatives like the Belt and Road Initiative and the Petroyuan kick in, but this is something that will play out over the course of this century.

It’s important to note though, that none of these are insurmountable problems. With a little bit of patience and creative problem solving, I have little doubt that China will solve these issues.

The question though, is when this will happen. And for that, your guess is as good as mine.

I used to think that Hong Kong had at least a good 10 years ahead of it, but with the recent round of protests, I’m not so sure anymore.

One of the Financial Horse commandments to successful investing (you can get a copy by signing up for the email newsletter at the end of this article) is not to catch falling knives. And the way I see it, HongKong Land looks a lot like a falling knife.

Sure, it’s trading at a 67% discount to book, but that doesn’t mean it can’t trade at a 70% or 80% discount to book. When investors panic and start pulling their cash, anything can happen to the stock.

And the way the Hong Kong situation is playing out, it just seems to be getting worse every day. I mean over the weekend there was a beating up of a JPMorgan China banker, and the shutting down of MTR stations. Carrie Lam is even talking about the possibility of China stepping in if things get worse.

Unfortunately though, it’s not possible to time the bottom of a market. No one can time it perfectly.  You’re either too early, or you’re too late. But the way I see it, for such things, I’d rather be late than early.

Without any clarity on how this Hong Kong situation is going to play out in the short term, I think there’s just too much uncertainty here to take the plunge.

But in investing, the timing matters as well. And I’m not so sure if now’s the right time to be buying into Hong Kong property.

I’ll be watching to see how the Hong Kong and China situations plays out, and if it shows signs of stabilising, I may look to buy into HongKong Land. I’ll share my thoughts via the FH Stock Watch on Patreon on that happens, so do consider signing up if you are keen!

Do you think that its good time to buy Hong Kong Land now? Share your comments below!