It’s funny how life turns out. Just last week I added CapitaLand Limited onto the FH Stock Watch, because I thought it was starting to look interesting as a long term investment. And today, CapitaLand announced that they would be buying over Ascendas-Singbridge from Temasek, in what is probably going to be the largest Singapore M&A deal this year.

Basics: Who is buying who?

There’s a lot of misinformation going around, so I’m just going to summarise quickly what’s happening (the full announcement and slides are here). 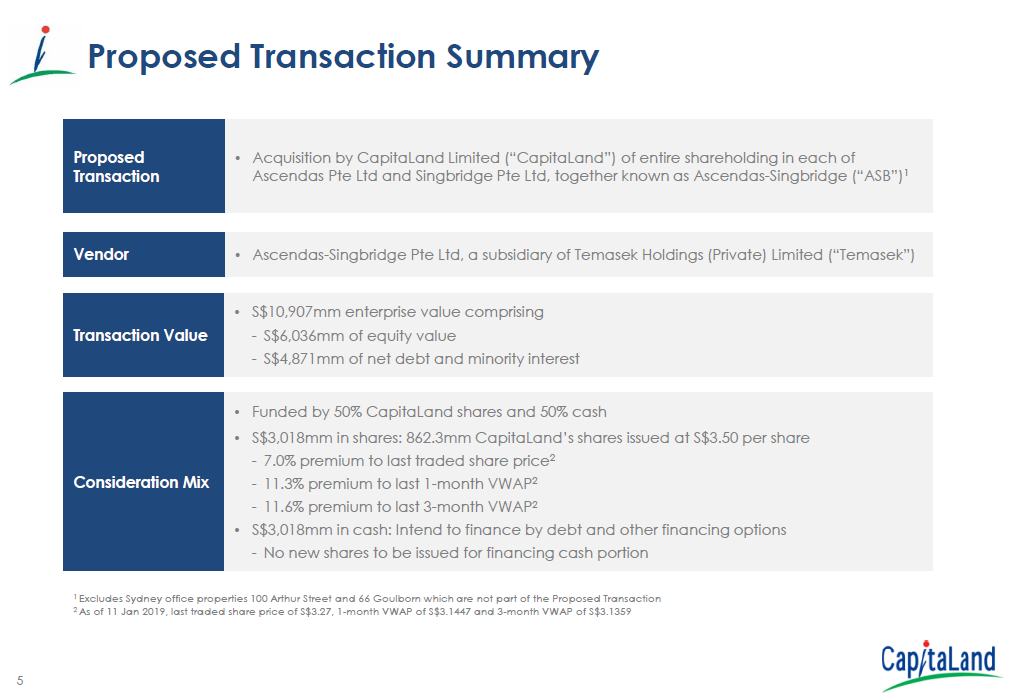 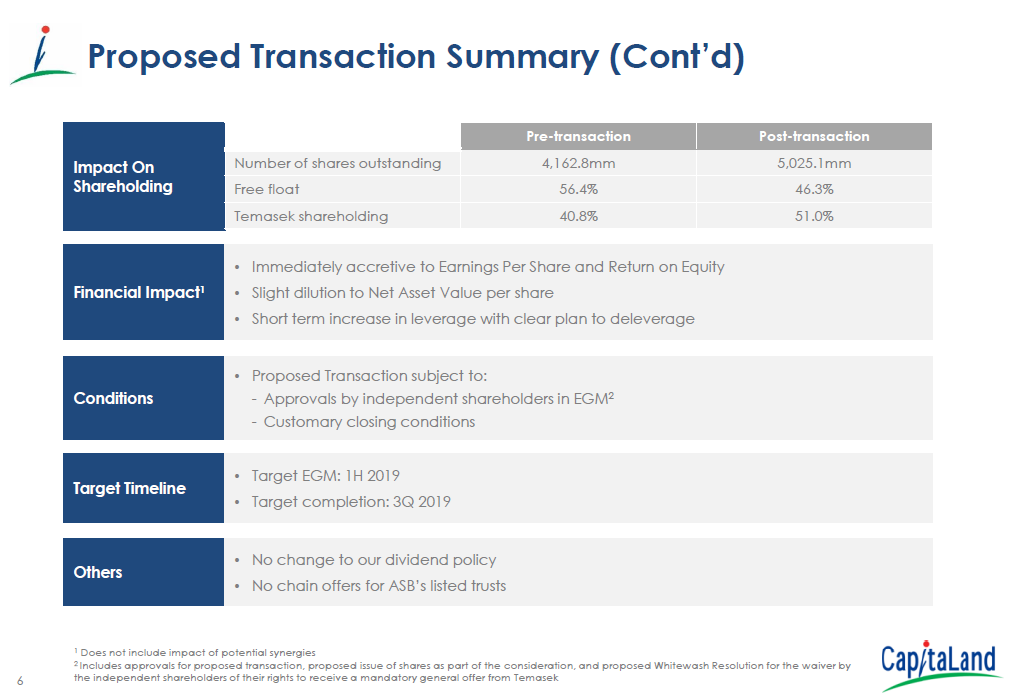 So that’s S$6.0 billion that CapitaLand has to cough up, which is not exactly spare change. This will be funded by:

And because this is an interested person transaction (Temasek is a controlling shareholder of CapitaLand), it will be subject to shareholder approval at an EGM, where Temasek is unable to vote. So it’s time for the small guys to shine ;).

The most immediate reaction, is that this deal may be dilutive for existing CapitaLand shareholders in the short term, because of:

So in the immediate term at least, there may be a mild sell-off as the market digests this information. 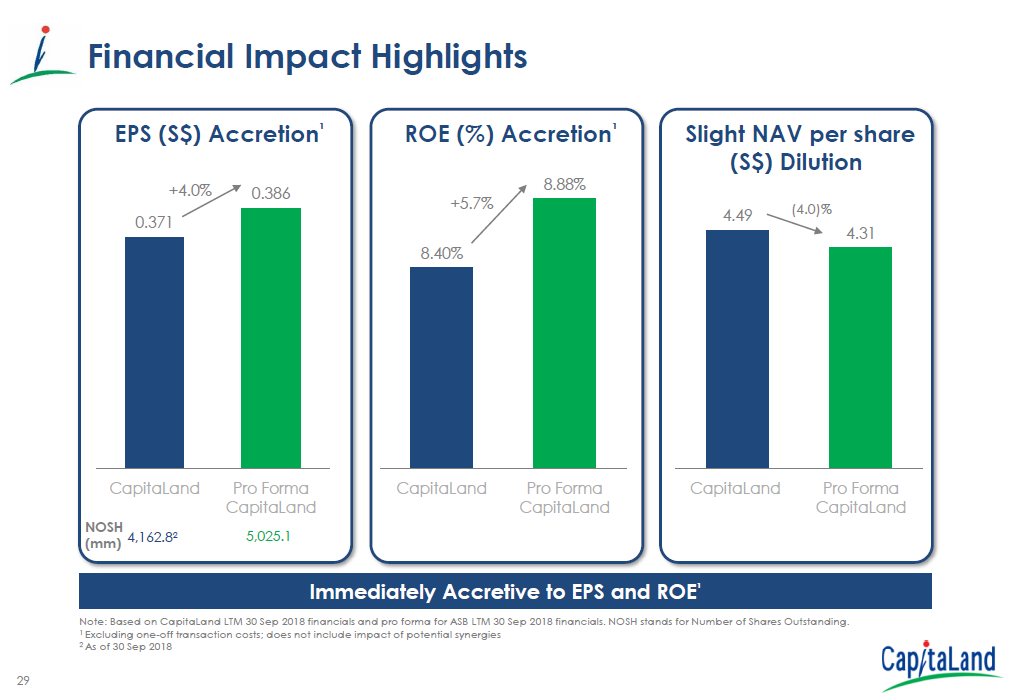 2. What is the right price for Ascendas-Singbridge?

We will get more information in the circular to be released, as well as the IFA (Independent Financial Advisor) opinion, but until then, it’s just not very clear whether CapitaLand is overpaying, or getting a good deal here.

3. In the long term, the only thing that matters is execution

The only thing that matters in the long run though, is execution. Whether CapitaLand can properly integrate Ascendas-Singbridge into its fold, and reap the operational synergies that have been promised, will determine whether this transaction will prove to be a success. Don’t forget, CapitaLand itself was created in 2000 by a merger between DBS Land and Pidemco Land, and look how far they’ve come. If they’re able to repeat the same thing here, the current share price is going to look like a bargain.

Historically and statistically speaking though, evidence tends to indicate that when large conglomerates make a large M&A deal, they tend to overvalue the company being purchased, and overstate the cost efficiencies that can be reaped. Such acquisitions never end well. There’s no way of knowing for certain what will happen here, but one hopes that with Temasek being involved, Temasek would have done its best to ensure a sustainable, long term growth path for the new CapitaLand.

4. Is it too late in the cycle for a game-changing acquisition?

The timing of this acquisition is interesting. It comes at a time when the global macro environment has become a lot more uncertain, with a slowdown in China (especially in real estate), and the Federal Reserve seemingly nearing the end of its interest rate hike cycle. At the same time, real estate prices globally are still at record valuations. It does raise questions of whether CapitaLand is making this acquisition at a top in real estate prices.

Don’t forget they’re taking on a lot of debt to make this happen (gearing ratio goes up to 72%), and there’s a large amount of debt coming due in 2020. If the market cycle does turn, there could be some challenges here.

Of course, as management you can’t just sit around all day and wait for a market crash, so I fully understand why this acquisition is happening. In any case, even with its elevated gearing, I don’t see any situation where CapitaLand runs into financial difficulties even in a recession. After all, Temasek holds 51% of the “new” CapitaLand. 😉 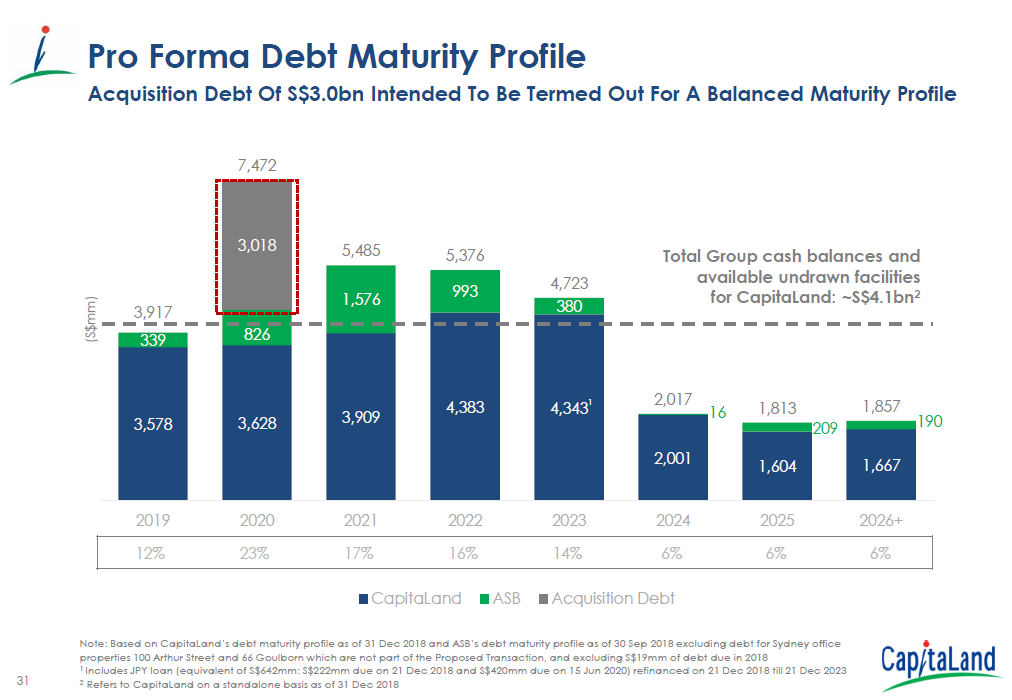 What I will say for certain though, is this. This move is a fantastic one for Singapore Inc. With the newly formed CapitaLand-Ascendas-Singbridge, Singapore will have the largest property developer in the whole of Asia, and one of the top 10 property developers in the world. This puts us on a level playing field with the truly big boys such as PGIM and Blackstone. And in the real estate market today, size, and scale mean everything. Scale allows you to raise financing more cheaply, attract big name institutional investors, have more bargaining power, more access to the juiciest deals, and basically have a seat at the table. As a Singaporean, I’m definitely proud of this move. Well done!

Although that said, I wonder how Mapletree would react. They’ve done amazingly well in recent years, but this CapitaLand-Ascendas merger would place the new CapitaLand on totally different league in terms of AUM size… Interesting times indeed!

Financial Horse has a set of 7 Commandments for Successful Investing, that I ask myself before making every investment, and that I will never break regardless of the situation. Enter your email below to receive a copy!

Enjoyed this article? Do consider supporting us and receiving additional exclusive content!