Singapore passport no longer most powerful in the world (Business Times)

The Republic now sits in second place, offering its passport holders visa-free or visa-on-arrival access to 190 destinations, according to the latest Henley Passport Index released on Tuesday night. Japan remains the world’s most powerful passport for the third consecutive year, with a score of 191. The East Asian nation, which previously tied with Singapore for the No 1 spot, pulled ahead of the Republic because it received visa-on-arrival access to Saudi Arabia, which Singapore did not obtain.

Ascendas Reit, Frasers Property, Cache Logistics Trust, Olam International, QAF, Keppel Infrastructure Trust: These Singapore-listed firms with assets in Australia have so far not been affected by the raging bushfires in Australia, BT reported on Tuesday.

Most petrol pump prices here have risen by three cents a litre to yet another record high in the latest fallout from the assassination of Iranian military leader Qassem Soleimani by United States forces last week.

With no clear sign of how Iran will retaliate against the US killing of top general Qasem Soleimani, traders are taking a breather. What’s happening: Risk-taking still looks muted, but global investors have resumed buying stocks. Interest in safe haven assets like gold and the Japanese yen has leveled off. Brent crude, the global benchmark for oil prices, is back near $68 per barrel after spiking close to $71 on Monday. Investors are shaking off the volatile political environment in part by pointing to how markets responded to the last big spike in tensions in the Middle East.

The truth is there is little signal in the noise of year-to-year stock market returns. What happened last year has no bearing on what happens this year. Historically, the percentage of gains in the stock market following a variety of scenarios is fairly similar. 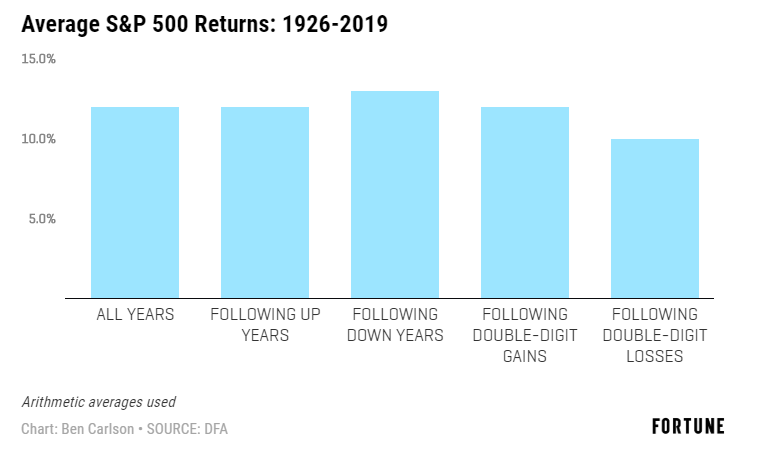 4 Essential Takeaways From The Decade In Fund Investing (Forbes)

Back in 2009, U.S. stocks were finishing a “lost decade,” while emerging markets, specifically the BRIC economies (an acronym for Brazil, Russia, India and China), were bringing in spectacular returns. Many expected that foreign trend to continue, but instead U.S. stocks came into favor and stayed in favor.

The takeaway: The next decade will probably be different from the last one, so make sure you have a global strategy that can help you adapt when markets inevitably change.

Remember that ten years ago, the tech-heavy Nasdaq Composite Index still hadn’t yet recovered from the 2000-2002 tech bust when it lost about 80%. It ultimately took 15 years for the index to surpass its March 2000 high, and by then, some investors had sworn off tech stocks indefinitely. But if you avoided tech because you’d been burned in the early 2000s, you missed out on some big gains in the last decade. The Nasdaq Composite returned nearly 16% annualized over the last ten years, outpacing the S&P 500.

The takeaway: Don’t limit yourself to only active or only index funds. Invest in the funds that are doing best now, and that’s usually a combination of actively managed funds and ETFs.

Give up believing in the “magic bullet”.

Overnight success is a myth. Successful people know that making small continual improvement every day will be compounded over time, and give them desired results. That is why you should plan for the future, but focus on the day that’s ahead of you, and improve just 1% every day.

If Your New Year’s Resolution Is to Start Investing, Here’s How (Nasdaq)

In fact, the greatest investor of all time, Warren Buffett, actually recommends a low-cost index fund as the best option for most investors. Index funds, as they are named, track an index such as the S&P 500, and usually have minimal fees associated with them.

There are also exchange-traded funds, or ETFs. These are similar to an index fund, but they can also be sector- or theme-specific, such as a technology or healthcare ETF, or an ETF that focuses on growth stocks, value stocks, or dividend stocks. In addition, some ETFs use leverage in order to give investors two, three, or more times the exposure to a certain sector. Other ETFs are short or reverse ETFs, which give investors exposure to the opposite of an index or sector — a way to bet against that sector or asset.

Finally, you may have a particular feeling about certain individual stocks. Famed investor Peter Lynch (who beat the market by leaps and bounds through the 1980s) is known for saying that individuals with specialized knowledge may be able to identify companies with big potential, even before Wall Street. So even if you are new to investing, you may work in a particular industry and have an insight into a great company in the making. If you really love a certain company or product, believe in that company’s management, and think the stock is trading at a reasonable price, you can start buying individual stocks today.

Plant-based meats have been criticised for being just another unnatural, processed food. But Chow sees a bright long-term outlook based on the inevitable dietary changes that come with ageing societies, the shortage of protein in Asia and the potential of the B2B market. Investment from the likes of Jay-Z, Bill Gates and Li Ka-shing has helped the maker of Burger King’s Impossible Whopper reach a valuation of US$2 billion. There is speculation that the company will launch an IPO this year, but CFO David Lee declines to be drawn in, saying that the emphasis is simply on scaling up in the US and making the Impossible Burger widely available globally.

Lots of people – not all of them with vested interests in the active management industry – worry that passive funds are in some way creating or contributing to a bubble in valuations. I don’t necessarily think that this is wrong. But this is not a black and white issue. You can believe a number of things simultaneously. For example, the rise of passive funds, in combination with a never-ending, central-bank-underwritten bull market, may well be distorting capital flows in some subtle or not-so-subtle manner.

There is also the ever-so-slightly more niche risk that certain passive funds may be creating an illusion of liquidity where there is none – in much the same way as the highly actively-managed Neil Woodford funds blew up last year. But none of these potential problems makes passive funds in and of themselves, “bad” things. If investors weren’t using passive funds to access the market, they’d still be buying it, probably using the same active funds that they’ve been pulling out of. People buy what’s going up – that’s the way this stuff works. Passive funds and ETFs are simply a new way to do that.

From ‘Middle-Class Joe’ to millionaire: Joe Biden is worth an estimated $9 million (Business Insider)

The richest people focus on earning, and they typically aren’t content with one source of revenue. As author Thomas C. Corley found in his multi-year study of self-made millionaires, the rich “do not rely on one singular source of income,” he writes in “Change Your Habits, Change Your Life.” In fact, “65% had at least three streams of income that they created prior to making their first million dollars,” Corley says, such as real-estate rentals, a side hustle or a part-time job.

Your community matters. It can even affect your net worth, says self-made millionaire and author Steve Siebold: “In most cases, your net worth mirrors the level of your closest friends. … We become like the people we associate with, and that’s why winners are attracted to winners.”

China to promote diverse investment instead of shares (Straits Times)

China will encourage the development of annuities and endowment insurance to diversify people’s investment into the stock market, instead of direct share purchases from savings, the government-backed Securities Times said in a report.

“The key consideration is to cultivate a multi-layer capital market,” said Mr Xiao Yuanqi, a spokesman for the China Banking and Insurance Regulatory Commission. “There’ll be part of savings flows to the institutional investors for sure, then the professional investors can allocate those funds to bonds and equities investment,” Mr Xiao said in a media briefing on Monday. “We didn’t mean to encourage direct purchase of shares from household savings,” he added.

China’s benchmark index rose on Monday as analysts believed the move would bode well for the country’s capital market in the long run.