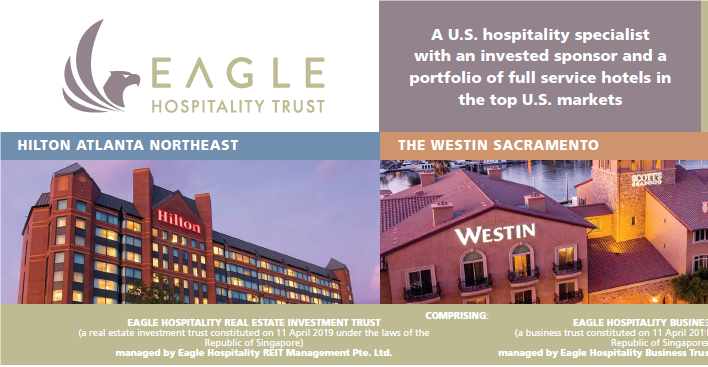 Okay, so I was planning to write another article today. Then I heard about the absolute disaster that was Eagle Hospitality Trust’s IPO, and I knew I had to drop everything and write on this.

In all my years’ experience in capital markets, and as an investor in Singapore, I have never seen an SGX main board listing, and a REIT with DBS as the lead issue manager, flop this hard. That’s how bad it was.

I’ve extracted this from the Eagle Hospitality Trust Balloting Results Announcement (emphasis mine):

18 million subscription for 44 million stapled securities. That’s a truly horrible 0.4 times subscription rate. And it wasn’t even a big offering, the public tranche was only US$35.0 million!

It’s funny how we usually look at IPOs and talk about whether it was 5 times or 10 times oversubscribed, and you look at this one and you need to start using words like undersubscribed to describe it.

To add further insult to injury, it turns out that DBS, as the underwriter, was heavily buying back shares on IPO day.

As disclosed in the announcement, DBS bought back about 7.99 million units, which works out to US$6.23 million, or 17.8% of the entire public tranche.

That’s not a small amount. In fact the 7.99 million units was about half of the trading volume of 15.3 million units on IPO day trading.

I’ve done up a simple table below to illustrate how poor this IPO performance was, compared to ARA US Hospitality Trust:

To sum it up, the public tranche was smaller, subscription rate was much lower, and IPO day price performance was much much worse on higher trading volume. The only potential saving grace is that the percentage of shares bought back on IPO day for ARA US Hospitality Trust was much higher, so perhaps if they didn’t buy so much back, it would’ve been a similar disaster. But who knows.

What went so wrong? Why are investors avoiding Eagle Hospitality Trust?

Now DBS is not an amateur issue manager. These guys know what they’re doing. So the fact that this IPO flopped so hard indicates to me that there are some deeper factors in play for investors here. Let’s run through some of them.

Too close to ARA US Hospitality Trust

ARA US Hospitality Trust IPOed on 9 May 2019, just a few weeks ago. Both REITs hold primarily US hospitality assets. And let’s be honest, as an investor in Singapore, it’s pretty hard to tell the difference between the two, given that the yields for both were roughly around 8.2%.

One possible explanation, is that most retail investors who were keen on US hospitality assets at a ~8% yield, would already have applied for ARA US Hospitality  Trust, and they didn’t bother waiting or saving up the cash for Eagle Hospitality Trust.

Interestingly enough, the general consensus among Singapore finance bloggers for Eagle Hospitality Trust was overwhelmingly poor. Just about every one said they didn’t like it or would be skipping it (my own take here).

Some bloggers such as ProButterfly and RisknReturns also picked up on the Queen Mary issue. To sum it up, they basically did some digging around on Queen Mary and found that there was a possibility that the government would require Eagle Hospitality Trust to spend up to $250 million on capex to keep the ship operational.

Queen Mary’s valuation was only $159 million, so obviously spending $250 million to save it would be an absolute disaster for the REIT.

Personally though, I don’t think this Queen Mary thing may be as big an issue as it’s made out to be. The disclosure in the prospectus on Queen Mary are quite limited, Singapore banks and regulators are notoriously “kiasi” (scared to die). If Queen Mary were indeed a problem, I just don’t see DBS or SGX signing off on the prospectus without a big red disclosure on the risk surrounding Queen Mary. But hey, that’s just my take on it. 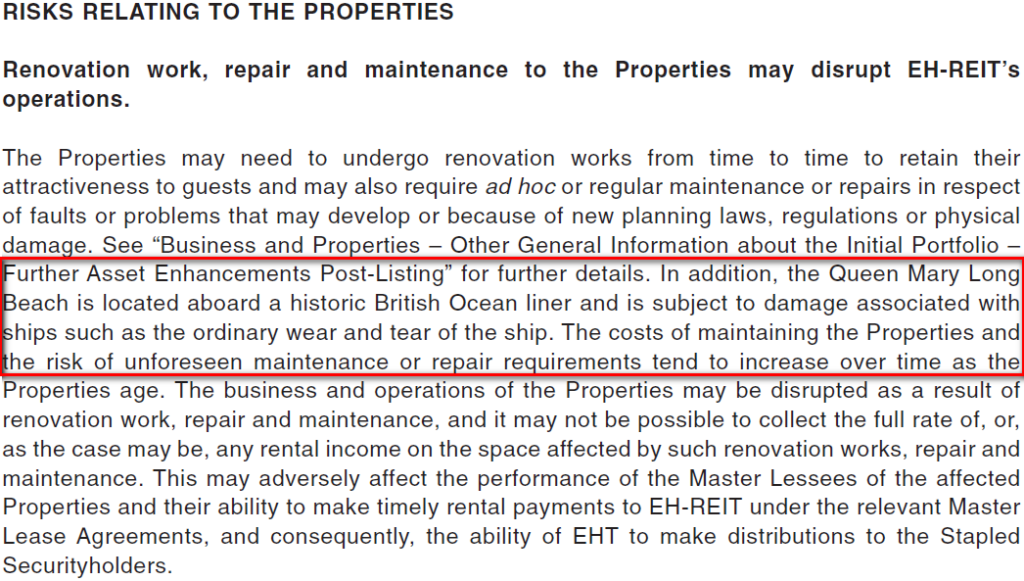 In any case, perhaps the overwhelmingly negative sentiment affected fellow investors, or perhaps everyone just arrived at the same conclusion independently.

Lack of a big Singapore sponsor

The other thing that struck me about Eagle Hospitality Trust, is the lack of a big sponsor behind it.

All previous US REITs listed in Singapore either had a big sponsor, or a big MNC with a large presence in Singapore to give comfort to Singapore investors. So ARA US Hospitality Trust had ARA, Keppel KBS US REIT had the Keppel name, and Manulife REIT had Manulife.

And Eagle Hospitality Trust has…

So perhaps another reason here that cannot be underestimated, is that Singapore investors do look out at the brand name of the sponsor. Random US property developers simply aren’t going to cut it, unless they go by the name of BlackStone.

When do I start buying?

There’s a saying in real estate that there’s no such thing as a lousy property, only a lousy price. I’m a huge believer in this. So despite all the doom and gloom, no matter how bad the assets, at the right price, I’m still a buyer.

I bought Keppel KBS US Trust at a 10.3% yield and about a 30% discount to book, but commercial assets are a lot more stable than hospitality, so I would want something slightly better here.

An 11% forward FY2020 yield (based on their projections) works out to about $0.60, which is also a 27% discount to book value. That could be a level that would get me interested.

That’s an 18% drop from current prices, which is still quite a long way to fall. There’s also no guarantees it would ever reach that price, but hey, if it doesn’t I’ll just skip it and I’ll save my money for something else.

I think if you’re a small REIT (1 to 2 billion market cap) with US assets, and you’re not sponsored by a big Singapore developer, you’ll be quite wary of coming to SGX to list in the future. With investor sentiment this bad, it’s probably going to take a while before investors forget about the debacle of Eagle Hospitality Trust.

Even if you’re a Singapore sponsor trying to list US assets, you’d be pretty cautious after this. It’s impossible to say for certain what caused the huge flop, and nobody would want to be second in line, unless they knew for certain they had their books covered, and did a smaller public tranche.

Either way, it looks like the choices that we’re going to get as a retail investor in Singapore, are going to be even slimmer in future. And that’s a sad day indeed.

What do you think about this flop? Share your thoughts in the comments section below! I respond personally to all comments!