Financial Horse Galloping to Greener Pastures
Home Guide to Investing Is the Hang Seng the best way to bet on China?

The thing about being a financial blogger, is that through reader questions, you can get a good idea what the flavour of the month trade is. And the past month or two, without a doubt, it has been the China trade. The most common questions I have received are (1) Is xx China stock worth buying at the current price, and (2) Which ETF should I buy if I want exposure to China ETFs. The second question is a really interesting one for me, because personally I think the long term prospects of China are out of this world. I have little doubt that much like how the 19th century was about the UK, and how the 20th century was about the US, the 21st century will be shaped by China.

Basics: What are the main China ETFs

China A shares (those denominated in RMB and traded onshore on the Shanghai/Shenzhen Exchange) are typically hard for foreign investors to get into due to tight capital controls and a heavily controlled onshore environment. I have little doubt that China will eventually open up the onshore capital markets, but unfortunately, that hasn’t happened yet. Which means that for offshore investors like us, our best bet is to use Hong Kong listed stocks of  China companies. These boast much better liquidity and less stringent capital controls (basically none).

There are 2 main ETFs to do this:

I’ll focus on the Hang Seng Index in this article, because it is my preferred way to play the Chinese market. I really like the much lower expense ratio (don’t forget if you buy the FXI, you’re basically betting that it will outperform by at least 0.65% a year, otherwise you’re just paying fees), and in the near term at least, I think the Hong Kong exposure will add some stability to the index. For reference, I’ve plotted the Tracker Fund of Hong Kong (Blue) against the FXI (Red) below, and you can see the disparity in performance. Because the FXI is 100% exposure to onshore China, the losses (and gains) will be magnified based on China’s performance. 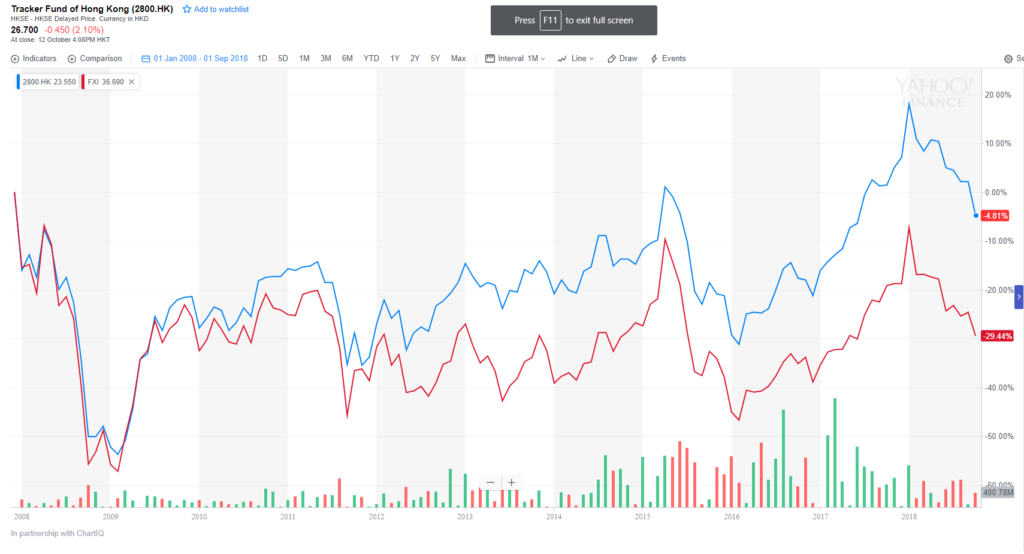 Note: A reader has very kindly pointed out that not all big China companies list on the Hang Seng, especially those domestically-facing ones like Kweichou moutai, Midea grp, China minsheng bank. These can be accessed via an ETF that gives pure exposure to China A50 Index and CSI 300 index, such as HKEX 2822 and 3188.

Do note however, that the expense ratio for these ETFs will be higher (typically about 1%), due to the additional costs associated with the ETF investing in China A shares.

I’ve plotted the long term returns of the Hang Seng (Blue) against the S&P500 (Red) and the STI (Green) below. Quick note, these charts don’t take into account forex movements and dividends, so the STI will perform a lot better than it looks in this chart.

Which index has superior performance depends greatly on the time period chosen. For example, the S&P500 had insane returns from 2008 to 2018, while the Hang Seng had some out of this world returns from 2002 to 2007. And that’s actually a good thing, because the whole point of building up global stock portfolio is that if one country’s economy is performing poorly, you’re actually well diversified and your returns from another index can juice up returns in your portfolio, smoothing out the losses. For example, if you were pure Asia stocks you would have been hit badly the past 6 months, but if you had mixed it up with some US exposure, you’re going to be sitting much happier right now.

For this arbitrary 20 year period that I picked, the Hang Seng’s performance closely matched that of the S&P500, although you’ll notice that there were many times during this 20 year period when this was not the case. 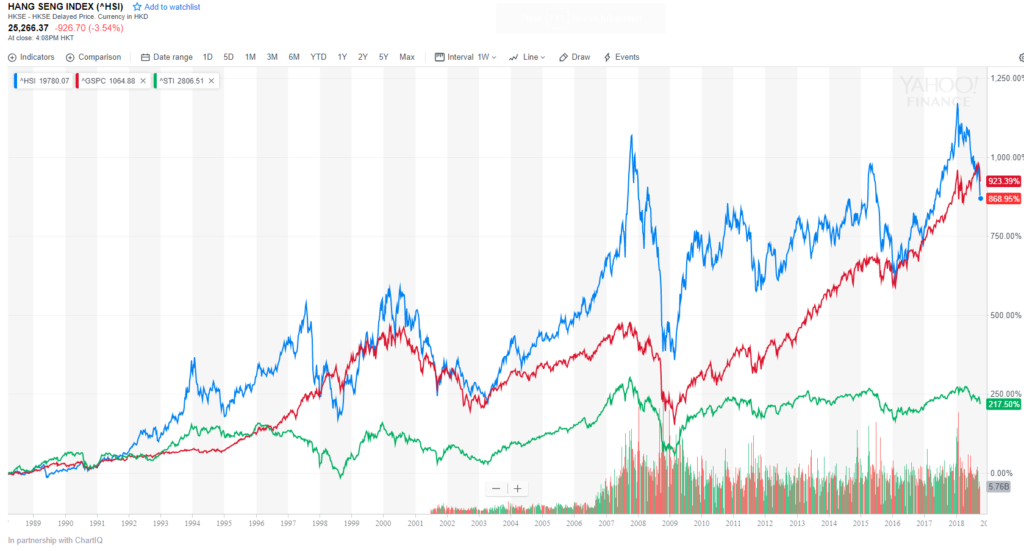 I’ve set out the top 10 constituents of the Hang Seng and FXI below. Sector diversification of both ETFs are  below as well: 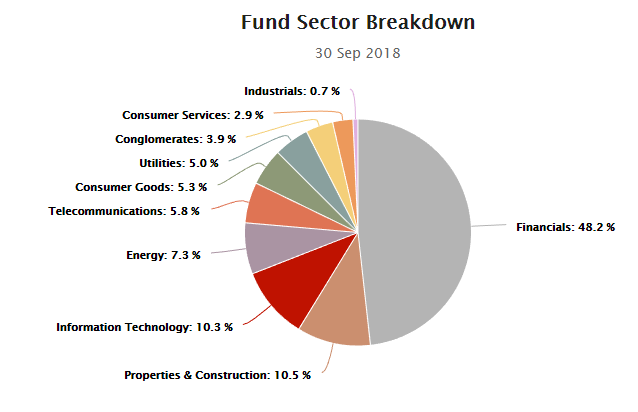 The Hang Seng trades in HKD, while the FXI trades in USD. The HKD is pegged to the USD. I have my suspicions on whether this peg will be removed in the future, but in the near term, I think it is unlikely, as a move like that would spark turmoil on global currency markets.

In any case, it’s important to note that with either ETF, you’re still getting underlying exposure to China companies listed on the Hong Kong exchange. In other words, your underlying earnings are denominated in RMB. So don’t be fooled by the currency your ETF is denominated in. You’re basically betting on Chinese companies that earn RMB onshore in China. And you will be exposed to RMB price movement.

You will also be getting exposure to the Chinese economy (that’s the whole point of this trade right?). Now that’s a tricky topic that I could write a 1000 page thesis on, but still get completely wrong. So do take my analysis with a healthy pinch of salt.

My base case assumption, is that China will be a global superpower in the 21st century. China has 1.4 billion people, which to put that in perspective, is about 400 million more people than the entire US, EU and Japan put together. They have a 300 million strong middle class currently that will expand to more than 550 million by 2022. That’s more middle class consumers that the entire population of the US. And as we all know, Chinese people are ridiculously hardworking and driven. Take a nation of kiasu Singaporeans, dial up the kiasuness by 2 notches, and squeeze the population of 230 Singapores into China, and you get an idea of how dynamic and vibrant the Chinese economy will be when they hit their stride. If you’ve been to any tier 1 city recently, you’ll be able to witness first-hand the rapid transformation China underwent the past 5 or 10 years. I remember how 10 years ago we were talking about Shanghai learning from Singapore – these days I don’t even recognise the technology being used over there.

The problem though, is that just because China will be a superpower in 2050, does not tell us how that will happen. The US is the world’s premier economy today, yet it still went through a depression in the 1930, and rampant inflation in the 1970s. So as always, the devil is in the details. The current macro climate doesn’t look amazing for a big China bet. It’s always hard to predict what Trump is going to do, but it’s starting to look like this trade war is part of a broader plan to control the ascendance of the Chinese economy. In any case, the trade war is in full swing, and my personal suspicion is that it’s going to get worse before it gets better.

In the near term, there are 3 possible scenarios:

So where does this leave us? It seems that in the long term, China will be the opportunity of our lifetimes. But in the short term, prospects are a bit murky. I can’t speak for anyone else, but for me, I’m keeping a close eye on the situation. I think a good buying opportunity may present itself some time in 2019, possibly when the devaluation of the RMB happens.

If you want to bet on the China economy, your best  bet is either the Hang Seng Index (using the Tracker Fund of Hong Kong) or the iShares FTSE/Xinhua China 25 Index (FXI). Both offer exposure to the largest China companies listed on the Hong Kong Exchange, which for foreign investors, is probably the best way to play this trade. If you want some Hong Kong exposure (and lower fees) go with the Hang Seng. If you want pure China exposure, go with the FXI. There’s no right or wrong answer here, it really depends on your portfolio allocation, because some people may already have existing HK exposure so they prefer something that’s all-in on China.

The bigger question though, is where are China stocks going to go in the next 2 years, and the next 10 years. In investing, the journey matters as much as the outcome. Just because an investment will have 500% returns in 10 years, does not mean it cannot drop 80% over the next 2 years. And in such a situation, most investors are going to sell. Personally for me, I don’t think this is the right time yet, I want to see how the trade war plays out a bit more before committing to this investment.

But as always, don’t just follow my advice blindly, think about the arguments I presented, think about whether you agree with them, and arrive at your own reasoned conclusion. You’ll be a better investor for it.