The family of Singapore’s richest billionaire, a co-founder of Sichuan hotpot chain Haidilao, is buying a freehold good class bungalow (GCB) in Gallop Road at the highest price per square foot for the area. According to documents seen by The Straits Times, the option to purchase the 21,649 sq ft bungalow, located a stone’s throw from the Singapore Botanic Gardens, was granted to Mr Zhang Hanzhi at $42 million on Dec 22. This works out to $1,940 psf, which analysts say is the highest price per square foot paid for a GCB in that area. Mr Zhang Hanzhi is the son of Mr Zhang Yong, the chairman of Haidilao International Holding, which went public in Hong Kong in September 2018.

Singapore leaders have expressed shock at the violence that has broken out in the United States, after supporters of US President Donald Trump stormed the US Capitol.

THE buzz in the Singapore shophouse market continues, with the sector attracting high-net-worth individuals (HNWIs) and families here and from abroad, in addition to property investment groups. The latest deals include three adjoining conservation shophouses at 8, 9 and 10 Craig Road were purchased by Singapore-based property investment group 8M Real Estate for S$29.28 million.

A Singaporean doctor, who transferred US$11.55 million (S$15.2 million) to a bank account in Romania over two months to fund his online trading activities, sued various parties to get the money back after the account was frozen by local authorities for suspected money laundering. In his suit filed in Singapore’s High Court, Dr Christopher Chen Yun Hian accused six defendants of conspiring to defraud him by misleading him into investing huge sums of money on a bogus trading platform. But in a written decision last week, Judicial Commissioner Mavis Chionh found that Dr Chen’s story about a conspiracy was “cooked up in a desperate attempt to recoup his losses”.

Malaysia expects to pay less than $270 million to Singapore for the termination of the high-speed rail (HSR) project, said a Cabinet minister who was deeply involved in discussions on the project. Datuk Seri Mustapa Mohamed, Minister in the Prime Minister’s Department (Economy), was referring to remarks in the Singapore Parliament on Monday (Jan 4) by Transport Minister Ong Ye Kung that the Republic has spent about $270 million on the project.

“The transport minister also said the compensation would not include land costs and we are made to understand that the Singapore government has acquired several pieces of land to implement the project. “Therefore, we are confident that the compensation cost will be much lower than $270 million. Anyway, the matter has not been finalised and will be discussed soon,” Mr Mustapa said in an interview on Astro Awani TV station on Monday evening, as quoted by Bernama news agency. Malaysia had allowed the bilateral agreement to lapse on the deadline of Dec 31, 2020, after both sides could not agree to changes it had proposed.

Studies on the effectiveness of the Covid-19 vaccines are being monitored by the Government. It will consider relaxing stay home measures for vaccinated travellers if the vaccines prove to significantly curb the spread of the disease, said Education Minister Lawrence Wong, who co-chairs the Multi-Ministry Taskforce on Covid-19.

iFast Corporation: The mainboard-listed wealth management platform said its assets under administration hit a record S$14.45 billion as at Dec 31, 2020, up 44.5 per cent on the year from S$10 billion. Shares of iFast Corp closed S$0.02 or 0.6 per cent higher at S$3.31 on Wednesday, before the announcement.

First Real Estate Investment Trust (First Reit): If the Reit’s restructuring and recapitalisation exercise proves successful, its manager intends to diversify its portfolio into new geographies – including nursing homes in Japan, hospitals in China and Myanmar, and other healthcare assets in Europe, the UK and Australia – with the help of its new sponsor’s network. The counter closed one Singapore cent or 3.8 per cent lower at 25.5 cents on Wednesday.

Japan’s stock market is heading toward a repeat performance from last spring as the country prepares for another COVID-triggered state of emergency, the declaration for which is expected to come on Thursday, nine months to the day since the central government issued its initial “soft lockdown.”

Cannabis stocks surged on Wednesday (Jan 6) as Democrats won a key US Senate race in Georgia and led in another, moving closer to a stunning sweep that would give them control of Congress and power to act on their promise to legalise pot. 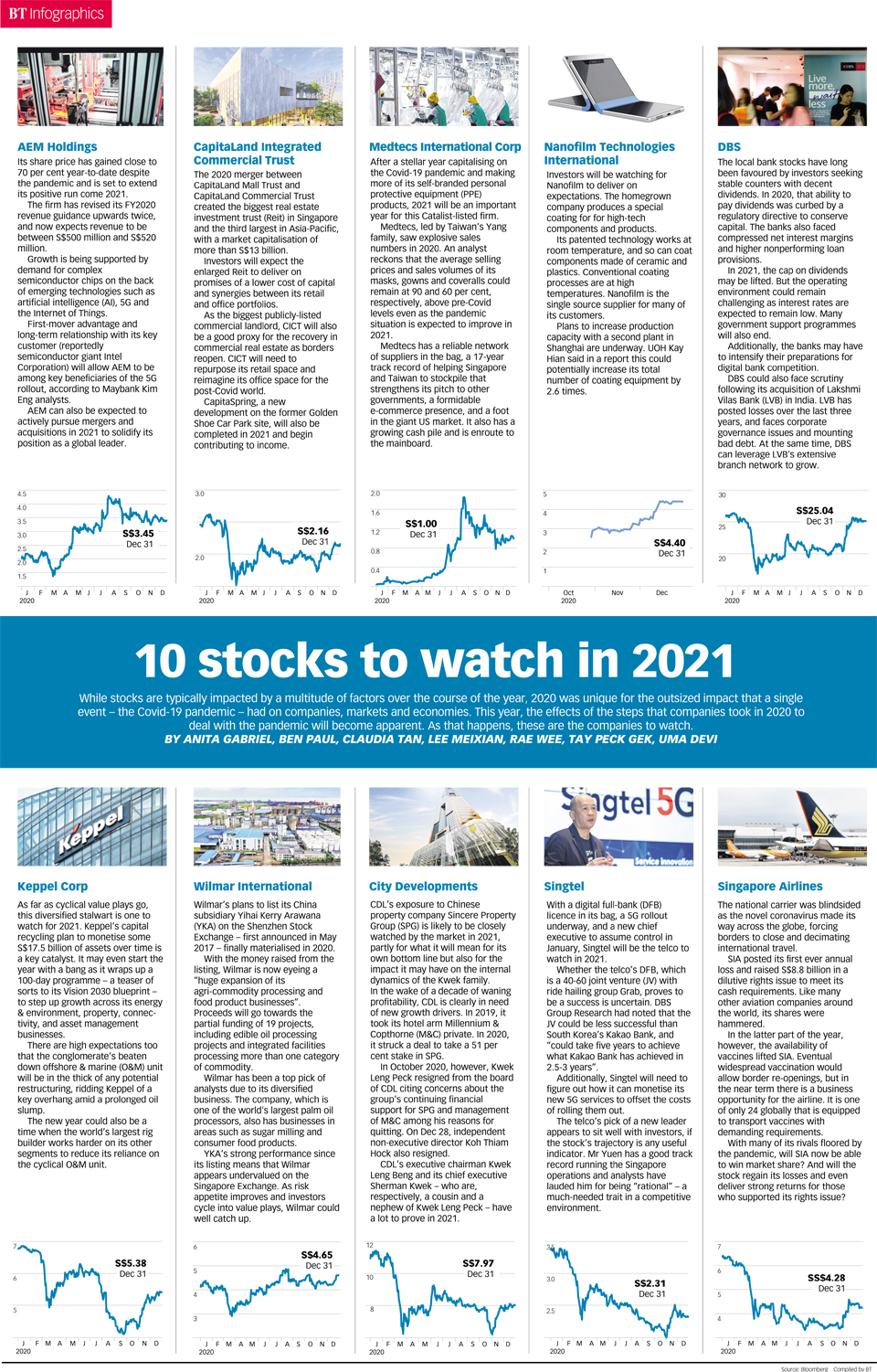 Investing is a continuous process, and every investment cycle occurs on its own time, not the time we would like it to. I see too many people trying to force things to happen in a specific time frame.

Map out your goals according to their timeline. Keep money you’ll need in the next two years in an accessible savings account. When you’ve reached enough in savings, financial advisors often suggest you invest your money according to these guidelines:

Commentary: Letting a robo-adviser decide how to invest your money is a double-edged sword (CNA)

Investor passivity may encourage a laid-back attitude towards other aspects of financial planning and the reluctance to acquire financial knowledge, where we prefer to delegate this seemingly onerous task to machines and algorithms. Investor passivity is a double-edged sword. While robo-advisers certainly appeal to the tech-savvy, inactive investors and those with limited capital, automated investing may not work for active investors who prefer to retain control of their portfolio and may be uncomfortable with letting a robot fully manage their money.

The lack of financial knowledge can be devastating, as highlighted by the tragic suicide of Alex Kearns, a young American investor who took his own life after he mistakenly thought he had racked up hundreds of thousands of dollars in losses from trading options on the Robinhood app. Kearns misunderstood the way Robinhood presented the result of his trades but since his passing, the app founders issued a statement “pledging to tighten eligibility criteria, educational resources and upgrades to its user interface for customers trading options.’’ The lesson in this for investors is that they need to be savvy about the platform – which speaks to digital literacy. This is in addition to having financial knowledge about sound investing and financial planning.

Markets will get plenty of notice before Fed cuts back on bond purchases, minutes show (CNBC)

Are stocks in bubble territory? Analysts are not convinced (CNBC)

The labour movement said it had disbursed more than $16 million to about 33,000 members as at Dec 18, to help members stretch their dollar on daily necessities and their children’s school-related expenses. This was done through the NTUC Care Fund (Covid-19), which was launched in March 2020. It provides up to $300 cash relief to union members whose incomes have been significantly affected by Covid-19.

Other programmes include the U Care Education Co-Funding scheme, which has provided education bursary awards to 4,500 children. Around 300 low- to medium-income union members also received interim support from the CapitaLand-U Care Resilience and Enablement Fund (CAP+Ure). It provides $250 NTUC FairPrice vouchers per child to help families tide over their children’s basic nutritional and educational needs. In its statement, NTUC said members can still apply for CAP+Ure support. Applications are also open for support via the NTUC Care Fund (Covid-19). The closing date is Feb 28 this year.