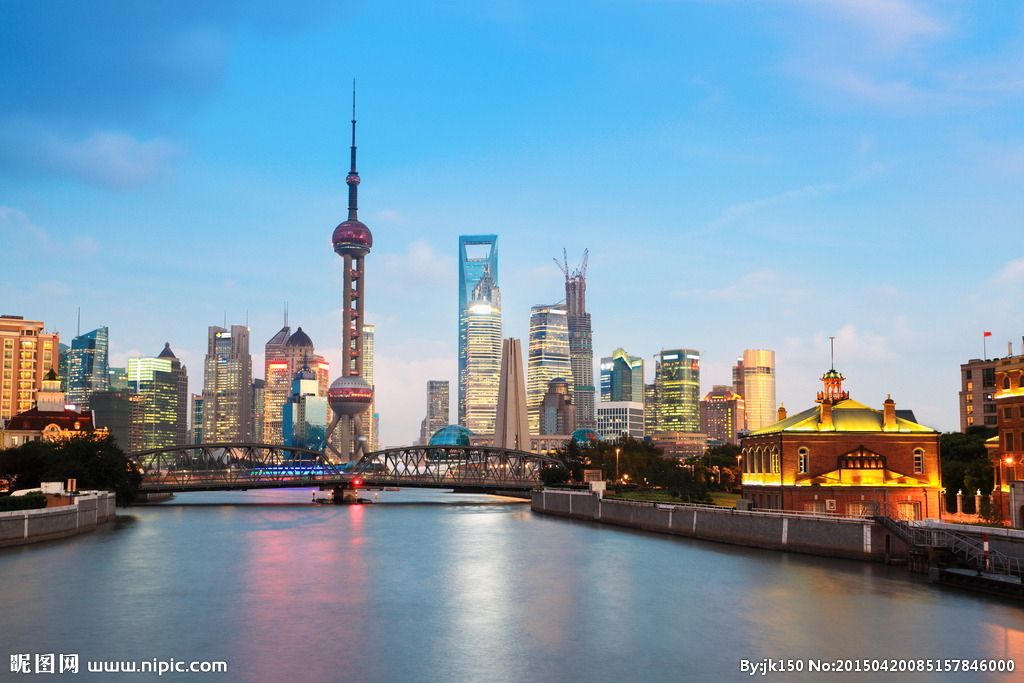 As many of you know, I’m a big believer in the China growth story, and the power of China as a long-term investment destination.

Going forward, I plan to start writing and sharing my thoughts on China more frequently.

If you’re keen on following this journey, you can join the new Facebook Group we’ve created (or sign up for our weekly newsletter). We’re trying to build a community that is keen to learn about investing in China / Hong Kong longer term. Regardless of whether you’re a 10 year veteran or if you know nothing about China, everyone is welcome!

Hope to see you there!

I was reading a World Bank report on China recently. And I was very pleasantly surprised by how good it was. Instead of a stuffy 200 page document, it actually had some really good insights and commentary on the future of the China economy.

So for the benefit of all readers, I decided to summarise my key takeaways here. For those who want the full read, you can check out the original report here.

Basics: What is the World Bank Report?

The report itself has an absolutely terrific executive summary, as extracted below:

Four decades ago, Deng Xiaoping initiated the reform and opening-up of China’s economy with his famous speech, “Emancipate the mind, seek truth from fact, and unite as one to face the future.” Since then, China has witnessed one of the most remarkable periods of sustained growth anywhere in the world, lifting 850 million Chinese people out of poverty. China achieved this growth by investing in its infrastructure and people, expanding the role of markets, and welcoming foreign trade and investments. Reforms were often gradual, pragmatic, and experimental, taking advantage of local pilots before expanding new policies to other regions. Through such reforms, China transformed itself from a predominantly rural, agricultural economy to an industrialized global manufacturing hub and the second-largest economy in the world.

China is now at a crossroads in its development. Rapid industrialization, urbanization, and efficiency gains resulting from four decades of reform and opening-up are no longer sufficient to sustain past growth rates. Declining returns to public investment, a rapidly aging population, and a less favorable international environment add to the urgency of finding new drivers of economic development. China’s leadership is fully aware of this challenge.

A key conclusion from this report is that boosting productivity will be key to China’s future growth prospects and innovation, and that market competition will need to drive productivity-led growth. This effort, in turn, will require addressing three “D’s”: reducing Distortions in the allocation of resources; accelerating Diffusion of existing advanced technologies and innovations to take advantage of China’s large remaining potential for catch-up growth; and fostering Discovery of new technologies, products, and processes to push out China’s own production possibility frontier. To promote the three D’s, the report identifies six major policy choices and recommends structural and policy reforms in seven key areas. Together they form the proposed “3+6+7” reform agenda.

Great stuff right? And before you think this is some Western oriented piece, it’s actually endorsed by the China Government. The way I see it, the greatest challenge facing the Chinese economy, is demographic change. All other points here essentially flow from it.

What’s so big about demographic change you say? Just about every major country these days is facing an aging population, from Europe to Singapore to Japan.

The difference in China though, is the scale of the problem.

If you only remember one thing from this article, you need to remember this. By 2050, the ratio of Chinese workers to retirees is projected to fall from the current 5:1, to 1.6:1.

Now all this is good news for the biotech and healthcare companies, but I’m going to put aside the micro stuff for now and focus on the big picture. What does this aging population mean for China?

Well, you just need to look at the example of Europe and Japan to find out the answer. And it means slowing growth.

So all that 7 to 8% GDP growth China has achieved over the past 10 to 20 years? Yeah… that’s all in the past now. The structural headwinds here are just too massive.

Let’s take a step back. How do you generate economic growth? There are only 2 ways: (1) Credit (debt) growth, and (2) Productivity growth (doing more with the existing resources). That’s it. Everything else ultimately flows back to these 2 factors.

So the first one is credit growth. And if you look at the past 10 years of growth in China, just about a huge part of it was due to credit growth, and using this credit (debt) to build infrastructure like railways, roads, cities etc. There’s a favour statistic about how China over the past 10 years produced more concrete and steel than the US did in the entire 20th century, which just goes to show you how extreme the credit creation has been.

We even have some nice charts below to back that up, where the change in debt to GDP% for China over the past 5 years is waay higher than just about every other Asian country, coming in at close to 45% debt growth. 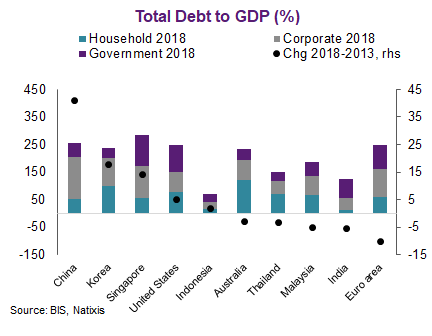 In fact, China’s debt to GDP is now sitting at around 250%, which is pretty close to where developed nations like US, Singapore, and the EU are at.

And the other kicker here, is that the more and more debt that goes into the system, the lower the effectiveness of the investment. The incremental capital output ratio (ICOR) basically measures the relationship between the level of investment made in the economy and the consequent increase in GDP. The higher it is, the more investment required to produce an additional unit of output.

Most countries are somewhere around 3, and China is at 6. In fact, much of the increase in the ICOR came post 2009, when China injected huge amounts of debt to build infrastructure, to rescue the world from the global financial crisis. ICOR has been steadily climbing since. 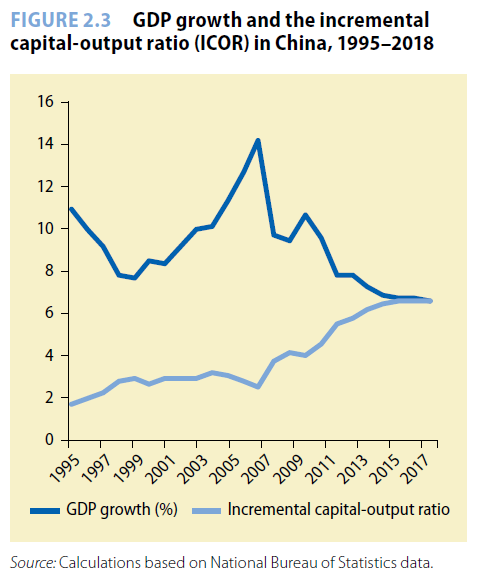 So long story short, China is now at a point where the debt levels as a percentage of GDP is high, and the effectiveness of creating new debt to stimulate the economy is reduced. If China wants to maintain the kind of growth over the past 10 years through debt creation, it’s going to need to create much more debt that it did over the past 10 years. 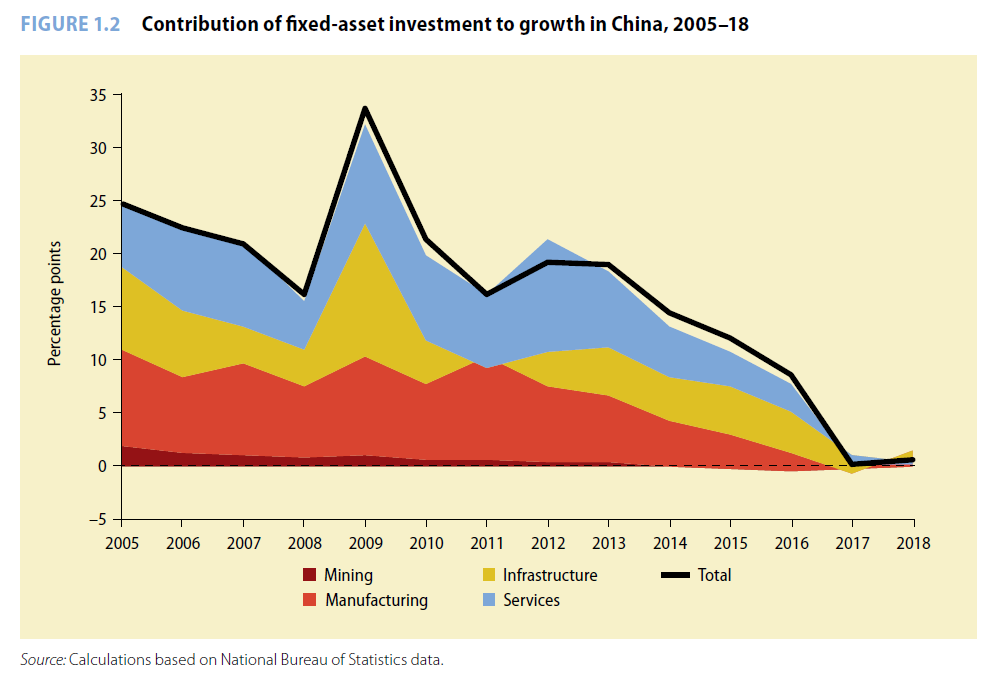 So if you can’t create much more debt to generate economic growth, you’re left with the other option, which is to increase productivity.

But remember the aging population from Part 1 above? So over the next 10 to 20  years, the size of the Chinese workforce will likely shrink. This decreases the amount of resources available.

So to achieve productivity growth, each person in the workforce will now need to do substantially more than they did in the past (note that increasing retirement age is another possibility, but I don’t think it solves the situation entirely).

So in the coming years, China needs to move heavily to encourage a lot more Huawei’s and Tencent’s to pop up, and for labour intensive businesses like Foxconn to move heavily into automation.

There’s already signs of this transition happening in China’s new breed of global tech companies. But this will need to happen on a much broader scale across the China economy.

And that will require broad reform to the economy, to promote greater emphasis on R&D, protection of intellectual property, attracting foreign capital, automation etc. The current set of infrastructure is designed for a manufacturing style economy, and to make the leap forward into a new “knowledge-driven” economy, will require a completely different set of infrastructure, legislative framework and mindset.

How this is executed, how long this will take, and how well it is done, is the million dollar question.

And this is why in the World Bank’s projected GDP growth for China over the next 3 decades, they’ve modelled 3 potential situations. One envisages comprehensive reforms to the economy, and translates into the highest productivity and GDP growth, while the other envisages limited reforms, and correspondingly the lowest GDP growth. 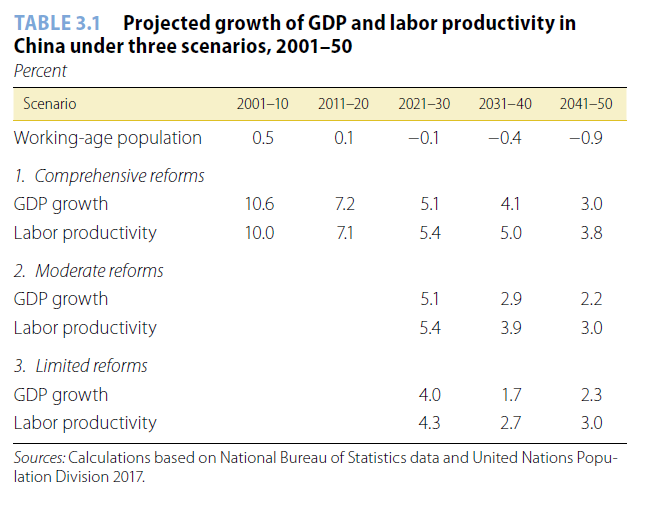 And.. what do we have in the short term?

Short term, you also have the ongoing US-China trade war that is affecting export demand, and the flow of foreign capital into China.

There’s also the Hong Kong issue that affects the viability of Hong Kong as a financial centre, although personally I think that risk can still be managed.

And just to show that when problems come, it comes all at once, there’s also the African Swine Flu that has absolutely decimated China pig populations, and resulting in massive inflation in meat prices. 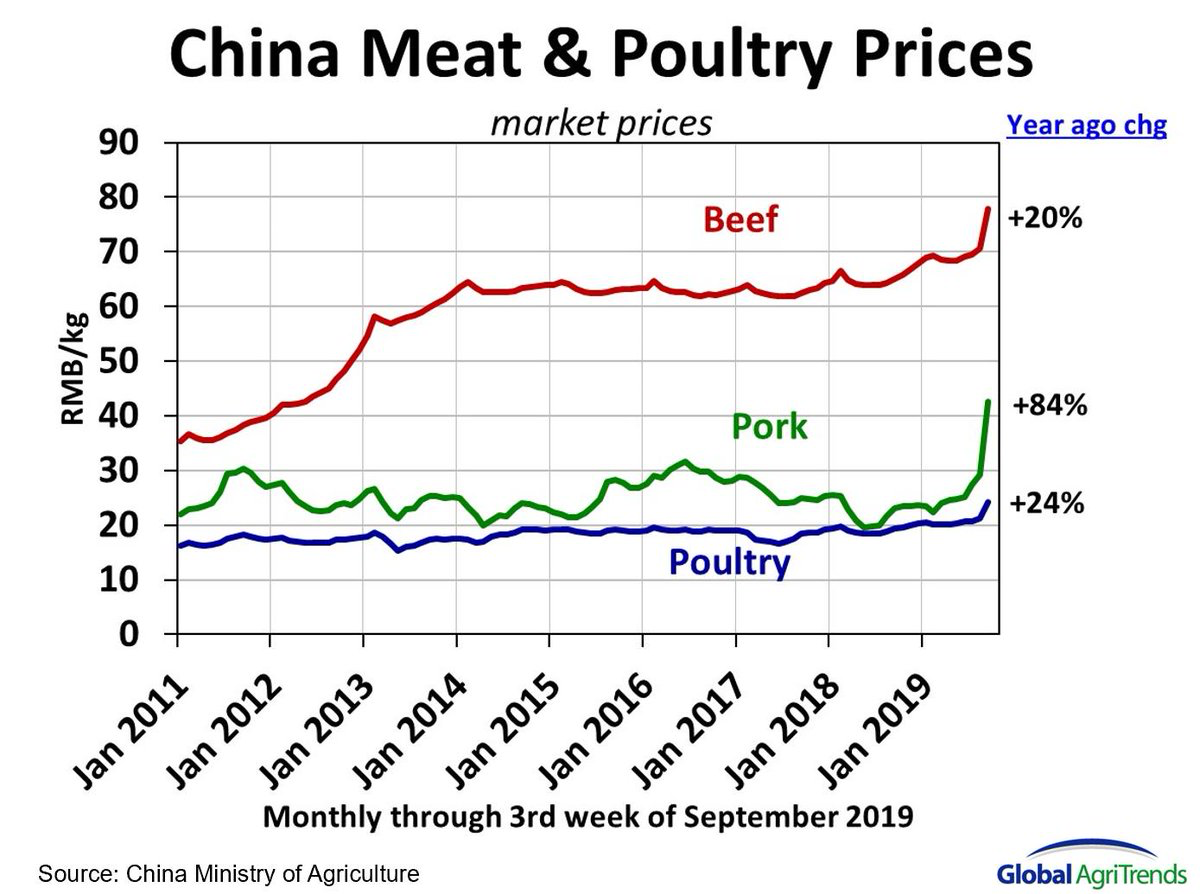 Yep, you read that right, 84% year on year increase in pork prices.

Closing Thoughts: What does this mean for China?

Unlike most of my other articles, there’s not going to be a clear, actionable conclusion to this one.

This article was merely intended to identify and understand the longer term secular trends that will drive the Chinese economy. No man is an island, and how exactly this plays out, depends on how China’s leaders execute, and how the global economy reacts in the coming years. Oh… and whether Trump gets re-elected.

Is China still a good long term investment? Absolutely. I think that the 21st Century will see a reversion of China to it’s historical mean, where it absolutely dominated the Asian economy. If you’re living in Asia in the 21st Century, you’ll just slowly get sucked into China’s orbit, much like how it has been for much of human history barring the last 2 centuries.

But there’s also no denying that there’s a number of secular headwinds in play for China here. How they navigate these challenges in the years to come, will be the story of our lifetimes.

What do you guys think? Will China successfully navigate the challenges to come? Share your comments below!