Part I of this trilogy focused on SingTel, Part II on Starhub. To complete the series, Part III will look at M1.

Much like Starhub, M1 Limited (B2F.SI) is a pure Singapore telco play, with all of its revenue coming from our sunny shores. Unlike Starhub however, M1 does not have any Pay TV offerings, so it’s revenue comes entirely from phone and internet.

It’s 1 year chart is set out below in blue, with Singtel in green and Starhub in red. The price performance has been abyssal, but of course, not as bad as Starhub. 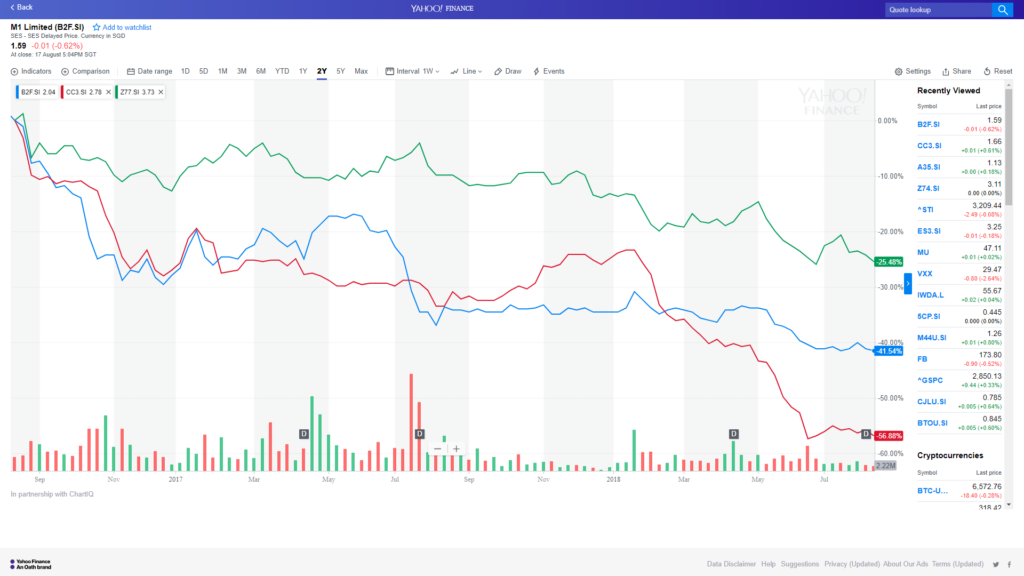 Strangely enough, while both Starhub and Singtel are showing declines in their Singapore business, M1 has been experiencing single digit growth. I suspect the reason behind this is 2 fold: 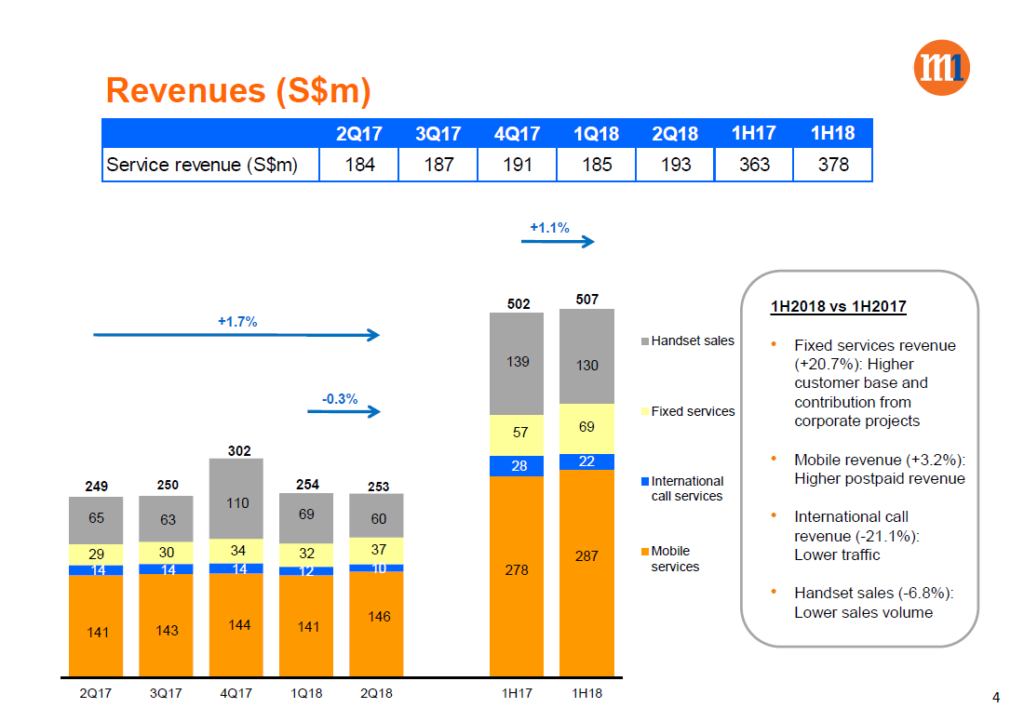 With Starhub’s ridiculous 130% dividend payout ratio, it would take about 5 quarters for them to fully deplete their cash reserve. That’s insanity.

With M1, you have a far more reasonable 80% dividend payout ratio, and a dividend yield of roughly 6.5%. Given that this is a relatively sustainable ratio, that’s actually pretty decent.

It’s a strange thing to say, but I actually quite like M1 for it’s Singapore centric play. Okay, I get that SingTel is amazing because only 13% of its revenue comes from Singapore, so when TPG comes in and wrecks the local telco market SingTel will still be okay. But given that we are pretty late stage in this economic cycle, with the Feds on a rate hike cycle, I’m actually expecting a lot of pain for the emerging market (EM) economies going forward. This would impact the core telco businesses in their respective home countries, and the weakening EM forex will impact SingTel’s earning’s when restated into SGD. So yes, M1 is a lot less diversified than Singtel, but as an investor, I can easily diversify through my portfolio. I don’t need to get exposure to India/Australia through Singtel, I can just invest directly in companies that are strong in those countries, in sectors that I favour.

What I dislike about M1

I’ve talked about this at length in the Starhub article, but long story short, the Singapore telco space is going to get a lot worse before it gets better.

But don’t take it from me, take it from DBS research in their recent report, which reads a little like a dystopian novel:

We project annual industry contraction of 4% over 2018-22 in the base case scenario. We have revised our assumptions of annual decline in the mobile industry through 2017A-2022F to 4% from 1% earlier on the back of 1) rising adoption of SIM-only plans, and 2) escalation of price wars in the industry as TPG battles it out with MVNOs.

SIM-only plans (8-9% of postpaid plans currently) are seeing rising adoption amid lengthening smartphone replacement cycles and aggressive promotions by MVNOs. Judging from Australia’ s experience, where SIM-only constitutes ~25% of the total postpaid, Singapore is likely to see a big rise in these plans. Customer spend on SIM-only plans vis-à-vis handset plans tends to be substantially lower and growing uptake would negatively impact mobile service revenues and dilute industry ARPU going forward. We also believe TPG would need to adopt very aggressive pricing strategies during the first few years of entry to snatch revenue share in an overcrowded mobile space with seven service providers. This would likely lead to steep contraction of voice and data yields, further weighing down the industry topline. Factoring these, we project an 18% contraction in industry revenues by 2022 from present levels vs our previous assumption of just 4% contraction of the industry topline over the same period. Annual industry contraction of 6% over 2018-22 if TPG is more successful than our projections under the bear-case scenario. We project that almost a quarter of the industry topline could be wiped out by 2022, if TPG, backed with a strong balance sheet, adopts heavily disruptive pricing policies, much like Reliance Jio in India, driving MVNOs out of the market and instigating severe downward adjustments to industry yields. Under this scenario, we expect the mobile industry to contract at an annual rate of 6% over 2018-2022.

DBS goes on to say that in the “best case” scenario where TPG fails and gets bought out by an existing player, they expect to see annual industry correction of only 2 – 3%. When your best case scenario involves a major new market entrant going bankrupt and bought out due to poor industry dynamics, and this results in only low single digit annual declines in the business, you know that you’re in a bad place.

Unfortunately though, I am absolutely with DBS on this one. It’s just a horrible business to be in right now, with the MVNOs aggressively grabbing market share, and TPG telco likely to start a price war when it enters.

So the customer saves 25% or S$568 by going with the SIM only plan and buying his own phone, and Singtel loses about 50% of its revenue or S$568 if the customers goes SIM only. It’s quite a mindblowing statistic, and I can’t believe I myself am still on a postpaid plan after this. If other consumers, like me, realise this fact and switch to SIM only plans once our existing plans are up, that’s going to be a world of pain for the telcos. Don’t forget that if you go with SIM only and buy a Xiaomi or Huawei (which are actually really amazing these days), the cost savings for you as a consumer are even greater (~S$1000).

Long term outlook of the telco industry is not good

If you set aside all the short term pain from TPG telco, and the move to SIM only plans, what are the long term prospects of the telco industry, 10 to 15 years out? Nobody knows for sure, but I personally don’t like what I see. If we extrapolate forward (which of course is the fastest way to get a forecast that is completely wrong, but bear with me), and we subscribe to the belief that the internet’s future will increasing be controlled by a few giants such as Facebook, Google, Amazon, Alibaba etc, then an internet connection will become a commoditised necessity no different from water or electricity. You basically just pick the cheapest one that actually works, and forget about it.

That’s not necessarily a bad thing, because utilities are attractive in their own way. But utilities are attractive only when they have stable cash flows, not when they are aggressively cutting price to grab market share, and not when the industry as a whole is shrinking. I suspect that the telco industry will eventually stabilise, but it looks like that’s going to be a mid to long term thing. It’s going to be hard to predict what path the industry takes to get there, and who are the survivors.

With a S$1.47 market cap, M1 is by far the smallest of the 3 telcos, making it a prime candidate for takeover.

It’s 3 largest shareholders (Keppel, SPH and Axiata Group (a Malaysian telco group)) collectively own 60% of the company, and have taken steps to review a sale of their stake in the past, to no success. Like when any good en-bloc, it always takes a couple times to get going. In the coming years, there is a real possibility of them exiting their stake. What price that would be, is anyone’s guess. 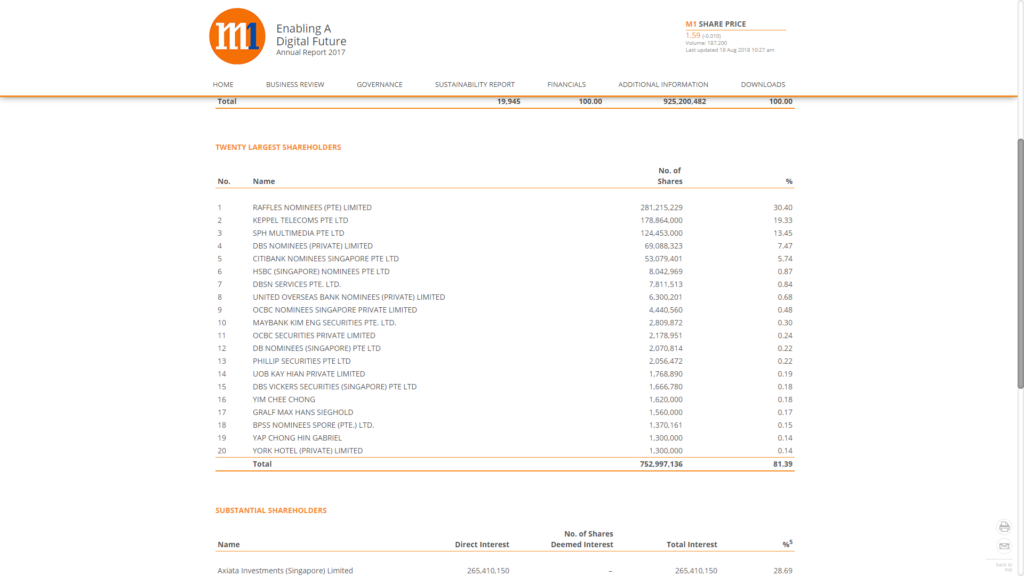 If I were to rank the 3 telcos in the order in which I would buy them, it would be Singtel > M1 >>> Starhub. As at right now, Singtel is definitely the best placed because only 13% of its revenue comes from Singapore, and I really expect the Singapore telco business to be in a bad place the next few years. M1 is the next best, because of its partnership with Circles.Life, and its lack of exposure to the Pay TV space. I would stay away from Starhub until the dividend has been cut, and the declining Pay TV revenue has stabilised.

Unfortunately though, even with the No. 1 Singtel, I am not hugely in love with the stock, because I believe that the core business in the regional economies is going to get a lot more competitive, and coupled with adverse EM forex movement, is likely to impact Singtel’s earnings going forward. I view Netlink trust as a much safer telco play, with a 6% dividend yield, a strong monopoly, and stable cash flow (Full disclosure: I own units in Netlink). Of course, with Netlink you don’t get the upside that you get with Singtel if the regional economy or telco business is much stronger than expected, but that’s something I can live with to sleep easy at night.

M1 gets a 2 financial horse rating from me. It’s better than Starhub, but not as good as Singtel currently. If you buy it, expect lots of uncertainty going forward, with the entry of TPG telco and the move to SIM only, as well as possible buyout speculation. Perhaps Circles.Life will dominate in the years to come and offset M1’s decline, but only time will tell.