While Budget measures to help workers and businesses hit by the coronavirus outbreak will provide some short-term relief, restoring Singapore’s reputation as a safe travel destination is necessary to speed up the rebound, said tourism industry players.

Income inequality here tapered to its narrowest in almost two decades, after income for the bulk of households rose by up to 5.6 per cent while the top 10 per cent saw their income grow just 0.4 per cent. At its peak, Singapore’s Gini coefficient hit a high of 0.482 in 2007. It declined gradually since, before spiking again in 2012. It hovered around 0.46 in recent years.

Singapore is looking for new sources of supply for masks and developing capabilities to manufacture them locally as other Asian countries clamp down on mask exports, Minister for National Development Lawrence Wong has said.

“In recent weeks, some places like Taiwan, Thailand and India have banned or tightened regulations on the export of masks,” he said in a written parliamentary reply on Tuesday. “We are therefore strengthening the resilience of our supply chain, including looking for new sources, and developing local manufacturing capabilities.” The Government is taking proactive steps to secure essential supplies such as masks, Mr Wong said. “In peacetime, we had built up a stockpile of surgical and N95 masks. As we draw down on this stockpile, we will also need to replenish it with new supplies.”

9 secrets of dividend investing, from a couple of stock pros who beat the market (Market Watch)

1. Go with dividend growers: Dividend stocks outperform, as a group, but companies with a history of increasing dividends do better, whereas companies with flat dividends tend to be more average. You want to own shares in companies that are likely to continue hiking dividends. To find those, look for these next four qualities.

2. Favor companies with a high return on capital: Companies with a long history of investing smartly in their business will probably continue to spend wisely. This means they’ll have more sustainable cash flow, so they’re more likely to keep hiking dividends.

9. Get good at math: Page and Mortimer never went to business school, but they both have advanced degrees in physics from the University of Oxford. This is unusual in investing, but the experience has made them better investors because it helped turn them into quantitative analysts, influenced by numbers rather than “stories.” In this way, the fund managers are less likely to follow the crowd or focus on the size of dividend payouts.

Stocks are near record highs, but people are still not investing (CNN)

The S&P 500 (SPX) — the broadest measure of America’s stock market — closed at another all-time high on Wednesday. The index has climbed more than 4.5% this year. The Dow (INDU) is a whisker away from 30,000 points. But volatility, geopolitical risks and political uncertainty are keeping ultra-cautious investors out of stocks, according to market participants. The global coronavirus outbreak has added to this skepticism, as the economic fallout from the disease remains to be determined.
Yet there’s less money in the market right now than there was during the 2007-2009 recession as measured by the value of money market assets, said Brent Schutte, chief investment strategist at Northwestern Mutual.
“Money market fund levels are still just at levels of 2009, even though they spiked all of last year,” said Schutte.

‘It’s hard to frugal your way to early retirement,’ says self-made millionaire who retired at 34 (CNBC)

Hacking your finances — ordering water instead of cocktails, moving to a less expensive area or hoarding grocery coupons just to save a few bucks — has become a bit of an obsession among Americans, especially millennials, looking to get rich and retire early. 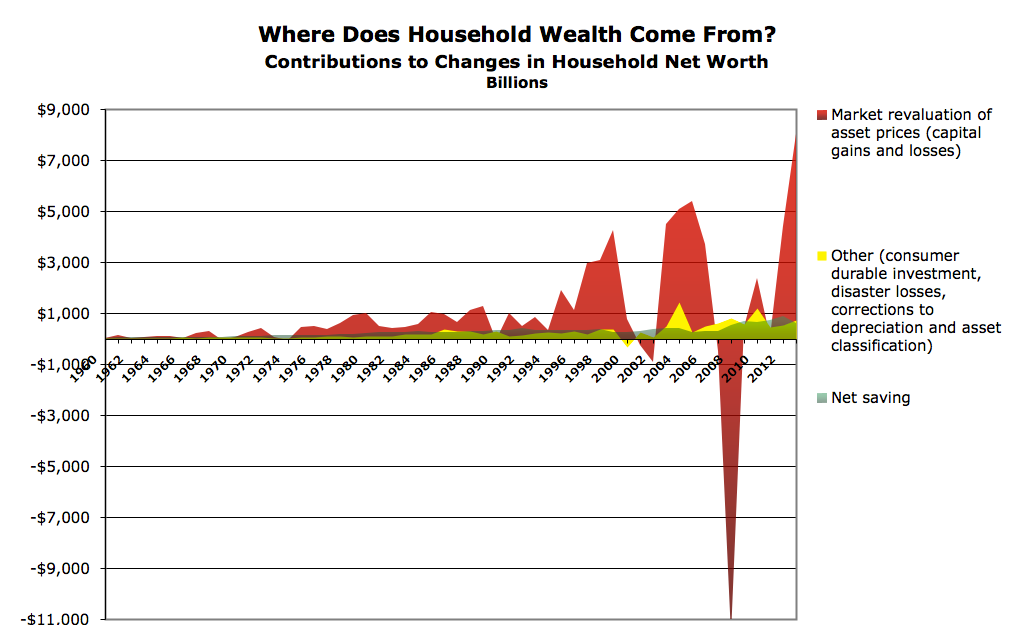 The Dow and Nasdaq are approaching big milestones. Is it too late to invest? (CNN)

So is it finally time for investors to bail on stocks? It’s only natural for people to start worrying about a top and a looming correction (or even a bear market.) But selling stocks just because indexes hit splashy new highs is silly. Long-term investors know that even if the market has occasional hiccups, stocks tend to keep climbing over the long haul.
Peta said he thinks the market could keep rising if the coronavirus outbreak doesn’t wind up hurting American companies beyond the first quarter. Apple (AAPL) has already warned of supply chain disruptions in China and a hit to sales in Asia. But central banks around the globe, including the Federal Reserve, might cut rates further and inject more stimulus into the global economy because of coronavirus concerns, Peta believes. The net result could be a boom later this year for profits and the economy.

5 Tips for Budgeting With an Irregular Income (Montana Standard)

When you know what you need to spend on the essentials and to have a little fun, set your “salary” equal to that amount. If you’ve determined you need $2,500 a month for necessary spending and discretionary spending, for example, you could set this as the amount you pay yourself. You can either pay yourself this money on the first of the month, essentially spending the prior month’s income, or pay yourself throughout the month as you earn money. It will be harder to spend last month’s income when you first start working or are just beginning to live on a budget if you were living paycheck-to-paycheck before. Try to reach a point where you can do this as soon as possible so you have predictable, regular income you can count on.

It’s no mystery: Starting a business is tough work. It takes capital, time, investment, and patience. The odds are somewhat against first-time business owners, too. More than 20 percent of businesses fail within the first year, and more than 50 percent fail in the first five years.

Yet by following this advice—setting a zero-based budget, keeping your business and personal finances separate, getting and maintaining the right insurance, keeping track of your finances, and hiring the right professionals at the right time—no matter how the business fares, you can ensure your financial health well into the future.

The outbreak in China dampens visits by Chinese tourists, raises the prospect of shortages and price increases for iPhones and other products and disrupts deliveries of parts for carmakers.

The effects on the economy and commerce have been modest, but the toll is likely to grow if factory shutdowns in China persist and the outbreak continues to spread rapidly. Chinese authorities say the number of new cases has dropped, but global health officials are cautious, noting thousands of infections could go undetected.

A big wild card is that consumer fears “will escalate and push households into a defensive mode” that reduces their spending and affects business, says economist Bob Schwartz of Oxford Economics. A wider coronavirus outbreak that infects 250,000 to 300,000 people globally almost certainly would topple the nation into recession, Zandi says.

Lost tourism represents the biggest threat. About 3 million Chinese people visit the USA each year, spending about $6,500 per trip, 50% more than typical international tourists, according to Tourism Economics, Moody’s and the U.S. Travel Association. Visits from China will probably fall by about 30% this year, an economic loss of about $5.8 billion, Tourism Economics estimates.

In their annual Economic Report of the President, released on Thursday, Mr. Trump and his advisers effectively dismiss an emerging line of economic research that finds large American companies increasingly dominate industries like telecommunications and tech, stifling competition and hurting consumers.

That research, which President Barack Obama’s economic team championed in 2016, has become fodder for presidential candidates like Senators Elizabeth Warren of Massachusetts and Bernie Sanders of Vermont to call for breaking up big tech companies.

In its report, the Trump administration contends that the studies that demonstrate rising market concentration in the economy are flawed — and that the rise of large companies may not be a bad thing for consumers.

China cut the benchmark lending rate on Thursday, as widely expected, as the authorities move to lower financing costs for businesses and support an economy jolted by a severe coronavirus outbreak. The epidemic has disrupted global supply chains and caused widespread disruption to businesses and factory activity in China, prompting authorities to deliver a steady stream of policy measures over recent weeks to cushion the blow to growth.

The one-year loan prime rate (LPR) CNYLPR1Y=CFXS was lowered by 10 basis points to 4.05% from 4.15% at the previous monthly fixing.

Investors are betting the authorities will roll out more monetary easing and fiscal stimulus in the near term to help smaller businesses that are struggling to tide over the crisis.

The U.K. economy created jobs at an impressive pace in the fourth quarter, defying the political turmoil over Brexit. The number of people in work rose a larger-than-forecast 180,000, leaving the jobless rate at a four-decade low of 3.8%, the Office for National Statistics said Tuesday. The numbers will likely reinforce speculation that the Bank of England will refrain from cutting interest rates this year.

The jump came in a quarter that saw a second Brexit deadline missed and Prime Minister Boris Johnson forced to hold a general election to break the parliamentary deadlock. His emphatic victory eased uncertainty, helping the economy avoid contraction after better-than-expected growth in December. In addition to a pickup in activity since Johnson’s win, the government is preparing to unveil a large fiscal stimulus next month to bolster growth. The pound was little changed after Tuesday’s jobs data. Risks remain, however. Johnson has ruled out extending the Brexit transition period beyond Dec. 31, even if no trade deal is in place.