For those who missed it, the balloting results for the SIA 3.03% 5 year retail bonds are out.

What was less expected though, was how weak the demand for these bonds was: 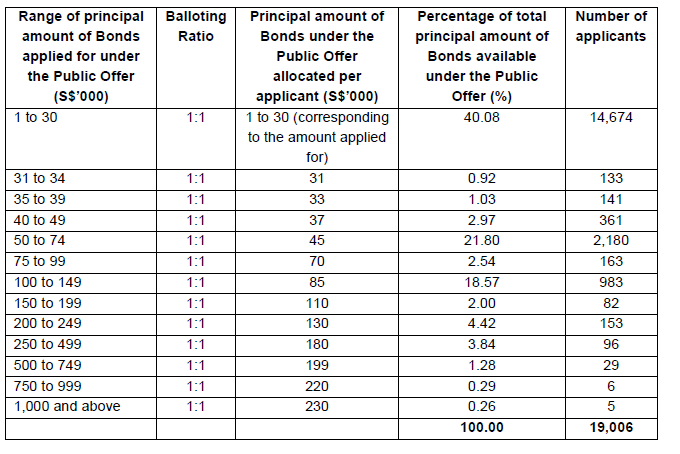 To sum it up, any retail investor who applied for anything up to S$30,000 received their allotment in full. Which, to put it mildly, is not something you see everyday.

To be fair, the retail tranche of S$450 million is significantly larger than the retail tranches of the Temasek and Astrea IV Bonds, but I don’t think that’s sufficient to explain the large gap in demand. It seems that all that talk about retail investors being unable to gauge risk-reward for themselves is not true. Singapore retail investors are way more shrewd than we think!

And, as it turns out, it wasn’t just the retail investors. The institutional tranche had S$510 million worth of applications on S$300 million, so it was 1.7 times oversubscribed, which is pretty bad too.

I quite like how Mr IPO put it: “Compared to the above IPOs [Astrea IV and  Temasek], i would venture to say that Temasek and Astrea left some money on the table for retail investors while SIA is more “stingy”.”

If you were one of the “lucky” ones who managed to get some SIA Retail Bonds, does this mean you’re getting a poor investment? Absolutely not.

As mentioned in the original article, I think these bonds are perfect for a very specific kind of investor, namely:

If you’re one of these, I think you should actually be happy that you managed to get far more of these bonds than originally expected.

I still think that the risk of default on these bonds is incredibly low, so if you hold them to maturity, you’re still getting a cool 3.03% a year, which is a nice 1.02% premium over the current risk free rate. Absolutely nothing has changed.

Don’t let the weak demand of these bonds get to you. Just because other investors don’t like this bonds, doesn’t affect the creditworthiness of SIA one bit.

If you’re a GLC like SingTel, and you’re sitting on the sidelines watching SIA do a big retail bond offering only to have it be 1.17 times oversubscribed, are you really going to tap the retail bond market in a big way going forward?

The most worrying thing about this saga, is that the next Retail Bond Offering we see may actually have a smaller public tranche. And that would be a sad day for the Singapore investment scene.

Enjoyed this article? Do consider supporting us and receiving additional exclusive content!